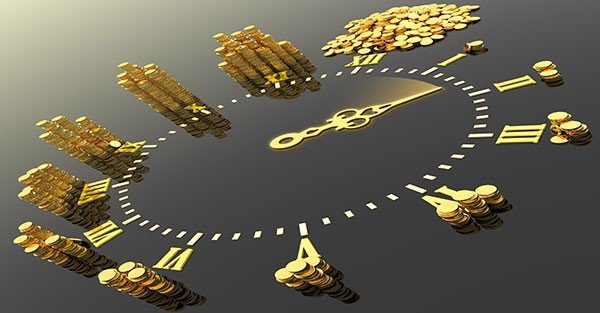 Probably around the time I was 12 years old, my parents opened up a bank account on my behalf.

Decades later, even though 99% of my assets are outside of the United States, I still maintain a small balance at that bank.

I appear to be suffering from some sort of bizarre financial nostalgia.

This morning I received an email from the bank informing me that they were increasing the interest rate on their checking accounts to a whopping 0.05%.

Woohoo! I can literally SMELL the money!

A quick check online showed other banks have similar rates.

A savings account at Wells Fargo yields you a big fat 0.01%.

And JP Morgan Chase generously pays its customers 0.02% on a 1-year Certificate of Deposit.

Even according to the US government’s own monkey math, the inflation rate is about 2.5%.

So my money is guaranteed to lose about 2.45% in purchasing power each year.

This is not just a US phenomenon.

It’s the same across most of the developed world, something that economists call “negative REAL interest rates.”

The term ‘real’ is economist-speak for ‘inflation-adjusted.’

So when you adjust your bank’s interest rate to include the effects of inflation, your ‘real’ interest rate is negative, i.e. you’re losing purchasing power.

There are only a handful of standouts.

Australia’s official inflation rate is around 1.5%. But you can still open a savings account in Australia that pays more than 2%.

I purchased a company in Australia last year, and the business bank account at NAB pays about 2.05%.

So, adjusted for inflation (and taxes), the savings is more or less maintaining its purchasing power.

For most people, though, this might not be an appropriate option, because many interest-bearing bank accounts overseas require deposits in local currency.

For foreigners, this means taking on some currency risk. If the Australian dollar falls against the US dollar, for example, you could suffer a loss.

BUT… there are still options around the world where it’s possible to deposit funds in a safe, conservative bank that pays reasonable interest without taking on any currency risk, especially if your home currency is the US dollar or euro.

You might be wondering how it’s possible that foreign banks can pay higher rates of interest.

Remember that, because the US dollar is the world’s dominant reserve currency, every major commercial bank in the world holds US dollars.

Having US dollars is vital if they want to participate in international trade and financial transactions.

When a merchant in Bangladesh does business with an Ethiopian supplier, that deal will take place in US dollars.

This means that both banks in Bangladesh and Ethiopia must maintain US dollar reserves.

And since major international banks hold so many US dollars, they’re looking for opportunities to put that money to work.

It’s actually quite common for foreign banks to make large loans in US dollars.

As an example, last month our agriculture business here in Chile closed an 8-figure loan package with a major Chilean bank– in US dollars.

We’re a Chilean company doing business in Chile borrowing from a Chilean bank.

And yet we closed the loan in US dollars. (This is actually quite suitable for our business.)

Unlike in the United States, though, where interest rates are set by the central bank, US dollar loans overseas are much more influenced by supply and demand.

Here in Chile, banks are sitting on a giant pile of US dollars… yet there aren’t too many companies looking to borrow in USD.

Supply of USD is high, and demand is low. So we locked in a very attractive interest rate and favorable terms.

As a depositor, you want the opposite. You want to look for places where the demand for US dollar loans is high, but the supply is low.

This means that banks will happily pay US dollar depositors a MUCH higher interest rate, because they’ll be able to charge borrowers an even HIGHER interest rate.

Mongolia was a good example several years ago (though it’s not anymore).

During the mining boom, foreign companies were piling in to Mongolia.

Demand for US dollar loans was strong, so in order to attract US dollar deposits, banks were offering rates in excess of 6% in a savings account.

Those dynamics have since changed, due in large part to the commodities bust and the Mongolian government’s unblemished track record of colossal stupidity.

(We’ll save that for another time.)

But there are still some places around the world where you can generate a solid rate of return without having to take any foreign exchange risk.

Panama and Georgia are two examples.

(Premium members: make sure to read our latest worldwide banking review to find safe, higher yield options for your savings.)

But again, it’s imperative to look closely at the banks’ balance sheets to ensure that your capital is safe.

We recommended a bank to our premium members a few years ago that was paying more than 7% on US dollar deposits.

Again, choosing between buying stocks at their all-time highs, versus collecting 7% in a safe bank account, I’ll take the 7% any day.

And next up, I’ll show you how to choose a safe, conservative, liquid, well-capitalized bank.