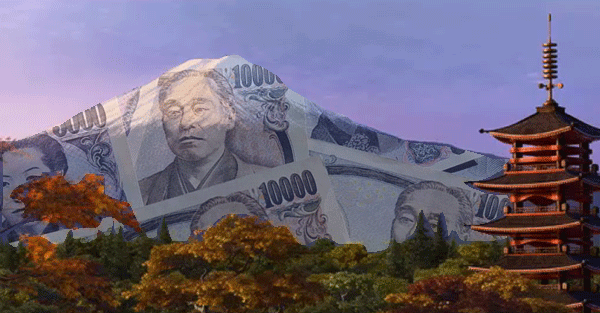 Making up the highest stratosphere in Japanese society, the samurai had quite a reputation to uphold.

Beyond honor and loyalty, they had to keep up appearances by wearing only the highest quality clothing and by being seen in only the best establishments.

The samurai image did not come cheap, often requiring more than their simple stipends could afford.

Thus it became quite common for samurai during the Tokugawa period to rack up large debts from merchant lenders in order to fund the lifestyles that were expected of them.

If a samurai didn’t feel like paying off those debts, however, he could simply have them slashed, with the merchants taking the hit.

The courts didn’t care about the merchants. They were at the bottom of the social hierarchy, and their profit-making activities were not nearly as noble as those of the samurai.

This system, where the productive were continually punished, simply couldn’t last. And it didn’t, with the Tokugawa shogunate brought to an end with the Meiji Restoration in 1868.

Yet these lessons have quickly been forgotten, as nearly 150 years later, the same unsustainable practices continue to plague Japan.

The disdain for the productive class is apparent in the heavy taxation of businesses and individuals, while public sector debt has ballooned to well more than double the size of the entire economy.

And just as the samurai escaped paying their bills before, the tradition of screwing over creditors continues today.

The stated amount of the debt might not be slashed, but as the government prints money to repay their creditors, the value of what they repay is worth increasingly less.

Shirking on debt is now an institutionalized part of the system. Today the Japanese government doesn’t just admit to having inflation, it’s one of its key objectives in order to stay afloat.

They’ve backed themselves into a corner.

This system clearly has an expiration date, one that’s long past due.

As it is, over 25% of Japan’s tax revenue goes towards just the INTEREST on the debt.

Remember, the late Ottoman Empire’s fiscal situation spiraled out of control just in a matter of years, to the point when they were paying 52% of their tax revenue just to pay interest on the debt in 1877. And at that point they were finished. They defaulted that year.

In April, the Japanese government raised the sales tax rate from 5% to 8%, which while doing nothing for the government’s ability to cover debt payments, did significant damage on the country’s growth in terms of GDP.

Clearly that didn’t work out very well, so they’re postponing the planned second increase in the sales tax.

But by doing that, the country’s credit rating was promptly downgraded by Moody’s.

While it’s astonishing that Japan’s rating is still as high as it is, the shift downwards is critical.

This is the beginning of the end. The Japanese government is running out of moves. If they raise taxes, they lose growth; if they don’t, they lose the last remaining shred of confidence from investors that they’ll ever make good on their debt.

Game over, Japan. Hara-kiri seems to be the only option at this point.