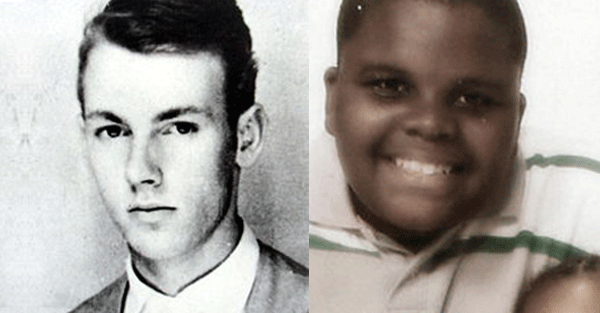 The sniper took a breath in as he put the fleeing form of Peter Fechter into the crosshairs of his rifle.

As he exhaled, he squeezed the trigger, landing his bullet squarely in the young boy’s back.

Watching Peter’s body fall, he mentally congratulated himself on what he’d just done to protect his nation.

There he lay in broad daylight for a full 50 minutes, screaming for help, before he was finally carted away.

What had Peter Fechter done to threaten the nation and deserve this public execution?

The boy was just an 18-year-old bricklayer, who wanted a chance at freedom, when he became the first person to die trying to escape over the Wall.

52 years later, the same things are still happening, and not in totalitarian East Germany, but right in the United States itself.

This time, the 18-year-old victim’s name was Michael Brown, an unarmed hospital worker, who was gunned down by police on the streets of Ferguson, Missouri.

After both young casualties, people were incited to protest in anger against the brutality of the state, and in both cases, the people had tear gas rained down upon them.

Who could possibly still believe that the police are there to protect and serve the people?

No matter the justifications they came up with, it’s was suddenly clear that the Wall was built to keep people in, not to keep others out.

Just the same, the police today are not there to keep you safe from criminals, but to keep the biggest criminals—the politicians—safe from you.

Though on the surface the current protests in Ferguson are about race, they reveal a much deeper truth about the situation. As they protest, the people are following their instincts, and their instincts are telling them not to trust the state.

We’re seeing people’s trust in the state beginning to crumble, not just with police, but with one government agency after another. More and more people are waking up to the fact that none of these institutions are really there to protect them.

The NSA says it’s there to keep you safe from terrorists, but in reality they’re spying on you to protect their power over the populace.

The Fed says it’s there to make the economy more stable, but they intentionally fuel economic volatility in ways that benefit their friends.

The FDA says it’s there to protect people from unsafe foods, but their regulations and endorsements of certain ingredients actually make your food more dangerous.

There’s an invisible wall going up around us, everywhere in Western civilization. People are starting to realize it and that’s why there’s so much anger. But rather than getting angry or emotional, it’s time to get ready.

Rational people have a plan B.

Because if you wait too long, you’ll wake up one day and see that the Wall has been built, and suddenly stands far greater than your ability to escape it unscathed.