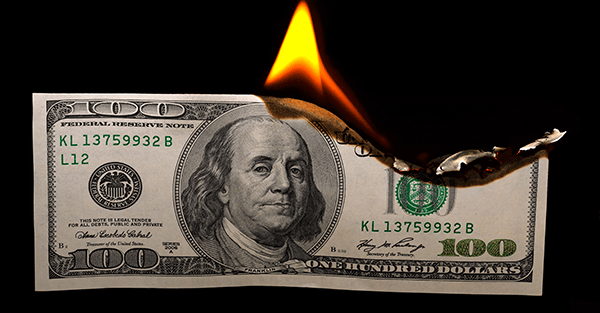 My parents took my sister and I to a fancy restaurant, and I distinctly remember a man dressed in a dark business suit a few tables over paying his bill with a crisp $100 note.

He pulled it out of his wallet, slid it onto the table, and walked away.

I was dumbfounded. It was more money than I had ever seen in my young life.

None of my friends had ever seen a $100 bill, and I was the big news at school the next day, regaling the whole class with stories of my proximity to such vast wealth.

Of course, back then, a $100 bill truly was a rare sighting because prices were so much lower.

A can of Campbell’s soup was 25 cents. Today it costs 4x as much.

A movie ticket ran about $3.50, according to the National Association of Theater Owners. Today it’s almost to $9.

Gasoline was 86 cents per gallon. Now it’s $2.20, and that’s after a major price collapse.

$100 could practically pay the rent in a lot of places back in the 80s.

That’s obviously no longer the case. Even a mundane trip to the grocery store can easily blow through $100 without feeling unusual.

$100 simply isn’t the awe-inspiring symbol of wealth that it used to be. And that’s because of inflation.

One measure of this trend is the average lifespan of the $100 bill.

As money changes hands during routine transactions, the constant wear and tear eventually starts to break down the paper.

You probably have a few bills in your wallet that look like they’re about to disintegrate.

The more frequently a bill is used, the faster that breakdown occurs.

According to the Federal Reserve, for example, a typical $1 bill lasts for about 5.8 years before becoming so fragile that it gets withdrawn from circulation and destroyed.

This makes sense given that a $1 bill is used so much more frequently.

So according to Federal Reserve data, the average lifespan of a $100 bill has fallen by more than 30% over the last several years.

This is primarily due to a significant increase in use, i.e. $100 bills are used more frequently in day-to-day transactions… at the gas station, grocery store, and even coffee shop.

Naturally, this increased use of the $100 bill is because prices are higher than they’ve ever been– you can’t pay the grocery bill anymore with a twenty.

Wages and salaries have also increased over time. But not as fast as living costs.

According to the US Department of Labor, most people are still earning less than they were 17-years ago when adjusted for inflation.

And that’s precisely the point: inflation is a very deliberate and sustained form of theft.

When prices rise faster than income levels, they’re ultimately stealing from your standard of living.

But not just once.

Inflation steals from you month after month, year after year. It never stops.

This has long been a common tactic for financially desperate governments throughout history.

Think about it– if they sent gun-toting police to your house demanding 2% of your wealth, there would be rioting in the streets.

But if the government and central bank engineer 2% inflation, no one cares.

And that’s the really amazing thing about inflation: governments and academia have managed to convince people that a little bit of inflation is totally normal.

They start early, even teaching students this garbage in high school economics classes.

Of course, they always forget to teach the part about how destructive inflation is over time.

The thing is, though, because inflation occurs so gradually, it feels ‘normal’.

Only when we look back to the past can we see how dramatically inflation has changed people’s lives.

The US Labor Department reports, for example, that in the late 1960s, fewer than half of households with children were dual income.

In other words, one parent supported the family on a single income.

Today in nearly 70% of households with children, BOTH parents have to work in order to make ends meet.

Just like the dramatic decline in the purchasing power of a $100 bill, this trend is a prime example of how inflation steals from people over time.

Back in 2011 Federal Reserve official Bill Dudley infamously responded to soaring food prices by citing the fact that an iPad 2 was cheaper than an iPad 1.

(Prompting one reporter to say, “I can’t eat an iPad!”)

They may even reinvent the way they calculate inflation.

But despite the speeches and statistics, most of which focus on monthly or quarterly changes, the long-term effects of inflation are very much with us.

And they aren’t going away.

It would be foolish to assume that the people who are causing this problem will suddenly fix it.

If anything, they’ll make it worse.

In fact, central bankers around the world have been concerned that inflation isn’t high enough… as if a brief period of price stability is somehow a bad thing.

We should absolutely expect higher inflation.

More on that later in the week.