Here’s one surprising deal that the government actually got right 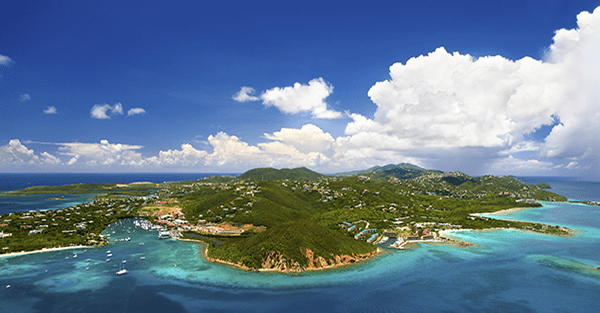 On January 17, 1917, as the Great War raged in Europe, the government of the United States signed a deal to purchase the Virgin Islands from Denmark.

The agreement transferred Denmark’s territories in the West Indies, “including the islands of Saint Thomas, Saint John and Saint Croix together with the adjacent islands and rocks.”

Good thing they picked up those rocks!

The US government paid “a sum of twenty-five million dollars in gold coin of the United States.”

$25 million was clearly a lot more money back then than it is today.

But given the change in the gold price over the years, $25 million worth of gold in 1917 is valued just under $1.5 billion today.

It means that, adjusted for inflation to 2016 dollars, the US government paid about $175 per acre for the Virgin Islands.

Today, an acre of land on one of the islands could easily set you back around $400,000.

So the USVI purchase ended up being a pretty solid return on investment.

Of course, that was an era when the US government made lots of astute deals.

They bought the Louisiana territory from Napoleon in the early 1800s for peanuts, a price equivalent to about 40 cents per acre when adjusted for inflation to 2016 money.

They bought Florida from the Spanish, Alaska from the Russians, etc. All of these were phenomenal purchases.

Today they spend billions of dollars to build a website. The inefficiency and incompetence is almost unbelievable.

It’s also important to note that the Virgin Islands purchase was transacted in gold during a time when gold was still money.

Look at a $1 bill, for example. It says “Federal Reserve Note.”

“Note” is just another name for debt in finance and accounting parlance.

The US dollar was originally defined by the Mint and Coinage Act of 1792 as 24.1 grams of pure silver.

Today’s dollar is simply a liability of the Federal Reserve. It’s debt.

Debt is also money at an institutional level.

For example, US government debt, all $19.9 trillion of it, is considered a “cash equivalent”.

That’s an accounting term which means that if you have $1 million in US government bonds, it’s the same as if you had $1 million at a bank, or even in physical cash.

US government debt is commonly held by commercial banks, central banks, large multinational companies, and even foreign governments as a type of cash reserve.

And it’s not unusual for these institutions to transact with one another using US government debt as a form of payment or collateral.

Large institutions will settle transactions and literally “pay” each other with US government bonds in the same way that you hand a $5 bill to the barista at Starbucks to buy a cup of coffee.

So US government debt is a widely-accepted medium of exchange, i.e. form of money.

This is incredibly bizarre, especially given how rapidly the US government is increasing its debt.

In other words, in the last ten weeks alone, the US government increased its debt by more than 200x the amount of money that they spent acquiring the Virgin Islands in 1917, even after adjusting for inflation.

And there’s no end in sight for this trend.

This coming Monday and Tuesday, the US government will auction off and issue another $52 billion in new debt over the course of just two days.

And as this chart from the Treasury Department shows, they have over 100 debt auctions scheduled just over the next 3 ½ months.

The frequency, magnitude, and speed with which they’re piling on debt has been a VERY long-term trend.

And it’s one that is not possibly sustainable.

Just look at how quickly interest rates have jumped. Back in July, the yield on 10-year Treasury notes was 1.32%.

Bear in mind that the US government’s budget has been deeply in the red for DECADES.

They have to borrow money just to pay interest on the money they’ve already borrowed.

So as interest rates rise, they’ll have to borrow even MORE money to pay the additional interest.

This cycle is pretty obvious. And given the rapid rise in interest rates, it may have already started.

Look- I’ve written about this before. It’s fine to hope for the best. And hope seems to be at a multi-year high in the Land of the Free right now.

US consumer confidence, at least according to the government, is at a nine year high.

Confidence is great. Success is even better.

But it’s dangerous to let emotion take hold, willfully ignore these trends, and blindly hope that this desperate cycle of debt and incompetence will somehow have a consequence-free, happy ending.

Whether that reckoning occurs today, tomorrow, or five years from now is totally irrelevant. Maybe it never happens.

But it’s hard to imagine you’ll be worse off for taking perfectly rational steps to distance yourself from the consequences of such an obvious trend.