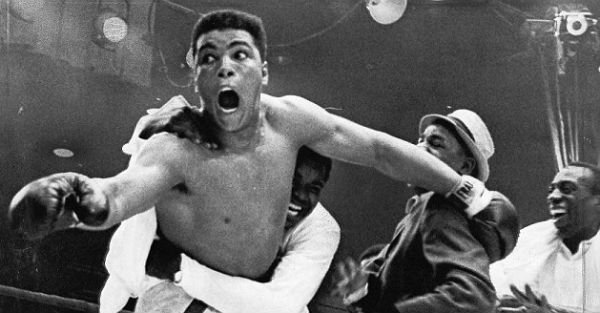 In February 1964, a 22-year old Cassius Clay (later Muhammad Ali) faced off against a gigantic Sonny Liston, the heavyweight boxing champion of the world.

Liston was an imposing opponent. I mean– this was a guy with mob ties who learned to box while serving hard time in prison. Plus he had twice devastated boxing great Floyd Patterson with two first-round knockouts, and he had a substantial reach advantage over Ali.

Ali knew it. And despite all the trash talking, he was nervous. His pulse rate was a whopping 120 at the pre-fight weigh in, more than twice his usual 54.

But seven rounds into the fight, Ali had won a major upset. And the pictures from immediately afterward show that even Ali was shocked.

I thought about this the other day upon reading the news of US House Majority Leader Eric Cantor’s loss in the primary election to David Brat, a political unknown.

Judging by the long stream of ‘holy crap’ tweets, Brat, like Ali, did what most people (including himself) thought was impossible.

It’s been more than a century since a sitting majority leader in the US House of Representatives lost in the primary… especially against a complete unknown.

The talking heads have been analyzing these results trying to assign a specific reason to Cantor’s stunning loss. Was it his stance on immigration? Tax reform? Or that he didn’t fight Obama hard enough?

None of the above. It’s not so complicated– the guy was ousted out of good old fashioned disgust.

People are sick and tired of the usual suspects running the show, and this was nothing more than an ‘anybody but the current guy’ vote.

This is happening all over Europe as well. Recent elections in the UK stunned the country as Nigel Farage’s UKIP party sidelined Labour and Conservative for the first time in nearly a century.

And in France, the revolution in the voting booth has caused a crisis of confidence in the government of Monsieur Hollande.

This level of disgust has finally arrived to US shores. And as exciting as it may be to get ‘real change,’ it’s important to temper one’s expectations. Because there is such a thing as being past the point of no return.

Remember– last year the US government took in $2.6 trillion in tax revenue. Then they spent $2.5 trillion just to pay for MANDATORY entitlement programs like social security, and INTEREST on the debt.

So the government blew through 96% of its tax revenue before writing a single check for most things we think of as government– the military, Homeland Security, or even the IRS.

Bear in mind that both of these major spending items increase every year; more people join the rolls of Social Security, and interest on the debt goes up.

Even the Congressional Budget Office’s own projections show government spending increasing at a far greater rate than tax revenue.

That’s the funny thing about numbers– arithmetic cannot be influenced by emotion. It doesn’t feel optimistic or pessimistic. It’s just truth. And the truth is that this situation is far past the point of no return.

Even with radical Social Security reform (i.e. STOPPING payments to seniors right away), they only buy themselves a few years. More worrisome, if interest rates increase by even just 1%, interest on the debt will skyrocket.

We can be happy. And we can hope. But it’s dangerous to presume that all the challenges improve simply because a new group of people is installed into positions of power.

This is the fallacy that persists at nearly every election cycle– people cheer that the new guy is going to fix everything. And this excitement almost always turns to disappointment.

Optimism is great. But it’s dangerous to invest one’s faith in a political system.

Elections merely change the players. They don’t change the game. And it is the game that is fundamentally flawed.