I can’t believe it: I agree with AOC 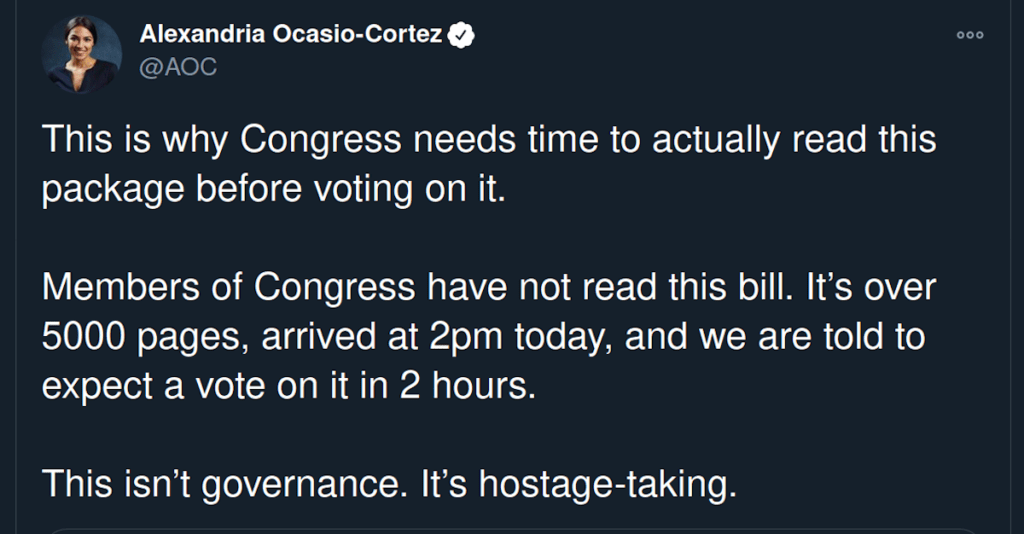 Since the beginning of March, the US federal government has spent more than $5 trillion battling the Coronavirus and the effects of COVID-19. And governments around the world, from Europe to China, have spent trillions more.

And that amount doesn’t even begin to scratch the surface of the long-term economic toll, including then incalculable cost of shutting down the economy.

Government-imposed lockdowns have wiped out trillions of dollars, pushing businesses to failure and costing millions of jobs.

Unsurprisingly, debt levels have spiraled out of control.

We’re supposed to cancel everything, avoid friends and family, pepper spray anyone who isn’t wearing a mask, and cower in fear in our homes… all because of a virus that, by one recent estimate in the European Journal of Epidemiology, has a survival rate of 99.9%.

But even still, they’re back at it. More lock downs, more endless spending, more debt.

The United States Congress just passed yet another ‘Covid relief’ bill. Technically it includes general spending provisions for Fiscal Year 2021 (to avoid yet another government shut down).

But the biggest chunk of it is COVID relief, which comprises nearly $1 trillion of the spending. The total bill is more than FIVE THOUSAND PAGES, and it embodies the old political phrase, “Never let a crisis go to waste.”

If the purpose of the bill really is to provide relief to Americans, then the bill should (in theory) be a few paragraphs at most.

But this bill is literally 5,593 pages… and contains some of the most absurd provisions imaginable.

For starters, Americans will receive $600 in ‘relief’.

So, you’re not allowed to operate your business and earn a living for yourself. And in exchange, the government will will send you enough money to buy some new clothes so you can stay warm while you stand in line at the soup kitchen.

But that doesn’t even begin to showcase the utter waste in this bill:

Page 1,461 of the bill, for example, authorizes nearly $135 million for BURMA (aka Myanmar) “to promote ethnic and religious tolerance . . . in Kachin, Karen, Rakhine, and Shan states”.

What bureaucrat could possibly come up with something so absurd? You get $600. But a bunch of corrupt generals in Burma get to rake in US taxpayer funds under the guise of ethnic and religious tolerance… but ONLY in FOUR out of Burma’s 14 states.

(Tough luck if you’re a Burmese warlord living in the state of Bago or Yangon… because obviously it would be ridiculous to give those states any money.)

Another $45 million of taxpayer money (page 1,491) will be awarded to key government officials in Central America– places like El Salvador, Honduras, and Guatemala– in order to “combat corruption”.

You can’t make this stuff up– they are giving money to corrupt politicians to fund anti-corruption programs. It’s genius!

Another $10 million of taxpayer money (page 1,486) will be given to the government of Pakistan SPECIFICALLY for gender studies programs.

Then there’s the small matter of $33 million for “democracy programs” in Venezuela. I’m sure Nicholas Maduro will use those funds well.

(The real irony is that, while allocated $33 million for Venezuela on page 1498, page 1347 of the bill expressly prohibits any funding for Venezuela. Unbelievable.)

Perhaps most noteworthy is that Members of Congress didn’t receive the final bill yesterday until roughly two hours before the scheduled vote.

Now, Anne Jones, the six-time World Speed Reading Competition champion is able to read an average of 4,200 words per minute with 67% comprehension.

So it would take her more than nine hours to read this bill in its entirety, and she’d still lose about a third of it.

There’s no way anyone in Congress was able to read this bill, or even thumb through enough of it to understand the big picture. And yet they still voted in favor of it, costing taxpayers another trillion dollars.

And that led a very angry Alexandria Ocasio-Cortez to take to Twitter and lament,

“This is why Congress needs time to actually read this package before voting on it. Members of Congress have not read this bill. It’s over 5000 pages, arrived at 2pm today, and we are told to expect a vote on it in 2 hours. This isn’t governance. It’s hostage-taking.”

For once I actually agree with AOC. This is an absurd process that exemplifies everything wrong with government: it’s wasteful, ignorant, out of touch, oblivious, embarrassing, shameful, and corrupt.

As an aside, Joe Biden praised the process by which the bill was passed, saying “I applaud the bipartisan Congressional economic relief package” and called it “a model for the challenging work ahead.”

Something tells me he didn’t read the bill either. 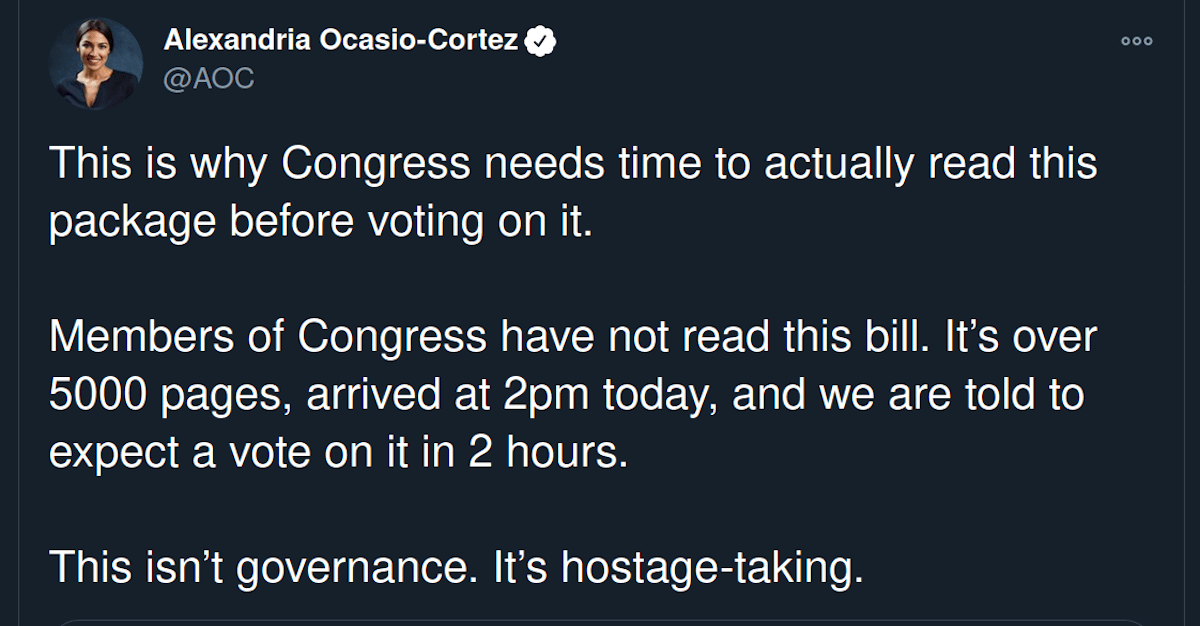