If you don’t agree with Obama you are “peddling fiction” 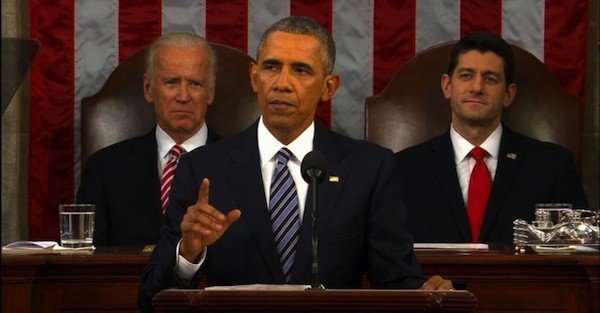 If you’re not watching it purely for the entertainment value, sitting through a State of the Union speech ranks somewhere between a colonoscopy and a root canal.

Every year I opt for the former (entertainment value, not colonoscopy).

But because I live overseas, one of the added entertainment benefits is that I’m surrounded by foreigners who are seeing this highly ritualistic propaganda for the first time.

The Sergeant-at-Arms introduces the President of the United States, and he receives a massive, five minute standing ovation as he walks across the water to the podium.

The applause finally dies down briefly, until, immediately after, the Speaker of the House formally introduces the President. And then the applause begins anew.

Try explaining that to a foreigner who’s never seen it before.

Foreigner: “Why is everyone clapping again for the President as if they weren’t just clapping for him 30 seconds ago?”

Me: “Because that’s just the way they do it.”

Me: “… ummm… because they’re all trained monkeys?”

But it is at this point that the real propaganda begins, where the President of the United States tells his fellow Americans that they are prosperous and free.

He cited, for example, the 14 million jobs created since he took office.

Of course he failed to mention the more than $8 trillion in debt (77% increase) that has been accumulated since he was inaugurated seven years ago.

If the President truly wants to take credit as the job creator-in-chief, the basic math works out to be nearly $600,000 in government debt for every single job created.

Zerohedge showed yesterday, in fact, that while debt in the US has increased 77% over the last seven years, GDP has only increased by 13%.

Now, you’d think that for each additional dollar the US government was spending and indebting future generations, there would be at least $1 in GDP growth.

Ideally you’d get more than $1 in GDP growth. Duh. Businesses have to do this every single day.

If I borrow $10 million to buy and develop agricultural farmland, obviously the net effect once I’m finished should result in a property that’s worth MORE than $10 million.

But that’s not how it works when governments spend money. It took them $3.71 of debt to buy just $1 of GDP growth.

Yes, the overall result may show that the economy is technically bigger than it was in 2009.

But this ratio is completely screwed up, and it is not indicative of “the strongest, most durable economy in the world.”

In the meantime, there have never been more pages of laws, rules, and regulations ever in the history of the United States than there are today, January 13, 2016.

Just this morning, in fact, the federal government published another 369 pages of regulations. Tomorrow there will be even more.

Should you find yourself out of compliance with any of them, the government can summarily deprive you of your freedom, your property, and even your family.

And it can do so administratively, without a fair and speedy trial in front of an impartial judge and a jury of your peers.

This is not what freedom and prosperity are all about.

President Obama is undeniably upbeat about America. And he’s right, there are a lot of amazing people doing great things in the US.

But decades of insane regulation, government debt, and astonishingly destructive monetary policy have resulted in a society where it is now easier to consume than produce.

Prosperity is not complicated. People figured out thousands of years ago that if you wanted to do well, you had to produce more than you consumed.

But the American system is the exact opposite, favoring those who recklessly borrow and spend, rather than those who work hard and responsibly save.

The President of the United States boldly accused everyone who doesn’t share his view as just making things up.

In his words, “Anyone claiming that America’s economy is in decline is peddling fiction.”

This is an extraordinary (and delusional) statement.

The government’s own numbers show that they are completely insolvent, to the tune of nearly $18 trillion.

The annual reports for the Social Security trust funds show that they are rapidly running out of money.

The Federal Reserve’s own balance sheet shows that it is precariously undercapitalized, with net capital less than 1% of total assets.

The Census Bureau’s data shows that the earnings for middle class Americans are stagnating.

The Labor Department’s numbers show that the number of Americans who have dropped out of the work force hasn’t been at this level since the Carter administration.

USDA figures show that the number of food stamp recipients is near an all-time high, simultaneously when the number of homeless children in America is at a record high.

And all of this, at a time when trust in government is near an all-time low.

These are all facts, not fiction.

The only fiction is pretending that this story has a happy ending.