In a free country, Martin Shkreli should be free to act like a complete asshole. 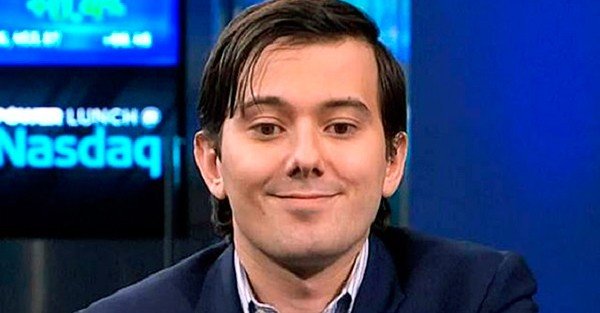 The most hated man on the Internet was arrested yesterday.

If you haven’t heard this story, his name is Martin Shkreli. He’s the guy who rose to infamy a few months ago when he increased the price of a life-saving medication by over 5,000%.

Something tells me he’s not going to win any humanitarian awards anytime soon.

His business plan for the company was simple: buy up the rights for drugs that treat rare diseases (known as ‘orphan drugs’) and hike the prices.

Orphan drugs typically have little competition. The diseases they treat are so rare that there’s not enough room in the marketplace for competition.

That de facto monopoly was an opportunity for Turing Pharmaceuticals to raise the prices and generate big profits.

The company made its first acquisition in August, buying the US rights to an orphan drug called Daraprim for $55 million.

(Cue the soothing voiceover: “Talk to your doctor to see if Daraprim is right for you…”)

The ink on the contract was still wet when Shkreli raised the price of Daraprim from $13.50 per pill to $750. And the outrage began almost immediately.

Presidential candidates from both sides chimed in, blasting Shkreli’s complete lack of sensitivity.

They may be right. He’s probably not a sensitive guy.

And frankly, raising prices by more than 50x overnight was an idiotic, short-sighted move.

Shkreli jacked the price up so high that he was practically begging other drug companies to start producing it for a cheaper price.

And that’s exactly what happened.

Another drug company called Imprimis Pharmaceuticals announced that they would produce a Daraprim alternative and sell it at a lower price.

Imprimis will effectively boot Turing Pharmaceuticals out of the market, meaning that Shkreli’s idea was totally pointless and poorly conceived.

Any good CEO with a modicum of wisdom, integrity, and respect for his/her customers would have picked up on that right away. So Steve Jobs he ain’t.

But still… Shkreli runs Turing Pharmaceuticals, which owns the rights to Daraprim.

And in a free country, you’re supposed to have the right do what you want with your own private property. Or choose how much to sell it for.

In a free country, you’re supposed to have the right to act like an idiot. Or an asshole.

But that’s not what happened here.

Mr. Shkreli’s complete disregard for his fellow human beings and short-sighted business strategy may be disturbing.

But I find his summary execution to be even more disturbing.

After the Daraprim price hike in August, Hillary Clinton was especially aghast, promising prospective voters that she would “lay out a plan to take it on.”

Now, the FBI’s press release on Shkreli’s arrest lists numerous fraud allegations which make him seem like a complete scumbag.

(There is, of course, an inconvenient footnote buried at the bottom of the document begrudging that Shkreli is innocent until proven guilty.)

Most of the charges involve lying and intentionally screwing people.

And yeah that’s obviously bad stuff. But it’s no different than what happens on Wall Street on a daily basis.

They don’t go after bankers who swindle their customers out of billions. And it seems pretty clear they didn’t arrest Shkreli because of this behavior either.

This is a very dangerous precedent.

When they don’t like you, or what you’re doing, you become a target. And they keep digging until they find a litany of charges they can bring against you.

In Shkreli’s case they didn’t have to look far. He has a checkered past, and it seems to be catching up with him.

But the next time they want to make an example out of someone, it probably won’t be the most hated man on the Internet.

Imagine if it were you who ended up on the wrong side of some government list.

When the body of laws, codes, rules, and regulations can fill an entire football stadium, the chances of them being able to find something that you’re guilty of is… 100%.

So, maybe Martin Shkreli is devoid of compassion.

And maybe he did commit the crimes they’re accusing him of… in which case I wonder why all the other fraudsters are not being pursued with the same vigor.

(Many of the charges against Shkreli seem pretty flimsy… I mean, the government is charging him with misappropriating funds? Hello Kettle, I’m Pot!)

But it really paints the picture when you realize that a member of the political elite can merely point his/her thumb like Caesar at the Colosseum, and then gun toting federal agents come swarming in with a laundry list of charges that go back so far they barely meet the statute of limitations.

That’s how it’s supposed to work in the Land of the Free.

But that’s not what we’re seeing here. This is the stuff of banana republics.