Introducing the latest country that PAYS you to BORROW money 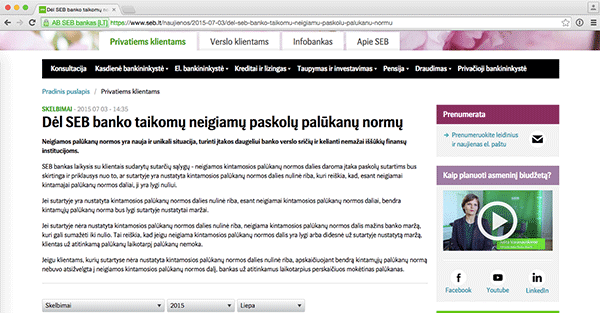 While all eyes were on Greece this weekend, one of the largest banks in Lithuania quietly posted an awkward announcement to its customers.

So negative, in fact, that the bank actually has to pay interest to some of its borrowers.

And the bank was totally unprepared for this.

Apparently some meaningful percentage of the bank’s loans are on variable interest.

SEB never thought in a million years that interest rates would actually be negative.

So many of the loans don’t actually have any provisions in place which would protect the bank in the event that interest rates turn negative.

As the bank rather delicately explained to its customers, “Negative interest rates are a new and unique situation” that are “raising a number of challenges for financial institutions.”

One of those challenges is that banking systems aren’t designed for negative interest rates.

Banks have complicated software to automatically update and calculate how much interest a customer owes based on the loan balance and current interest rate.

But the software designers, especially for older systems, never thought to include anything about negative interest rates.

So now banks have to abandon much of the software and manually recalculate what they owe to their borrowers.

And while they informed customers that they “will comply with the [loan] conditions” as required by law, they also wanted to be vocal about the fact that they will lose money.

Simply put, whenever banks have to pay their borrowers, you know that your financial system is in extreme crisis.

People can ignore it all they want. Politicians and central bankers can try to deceive everyone and pretend like the system is still strong and robust.

Do you remember how things were in 2007 and 2008 right before the last big financial meltdown?

Any talk about a major crisis was met with derision and ridicule. And yet, when the system collapsed, it all seemed so obvious in retrospect.

Suddenly everyone said, “Duh, of course there were going to be major problems when banks were giving loans to dead people.”

Well, this too is going to seem obvious. And at some point in the future they will say, “Duh, of course there were going to be major problems when banks had to pay interest to their borrowers.”

But before that happens, there’s going to be a major banking crisis (if not several). Make sure your money is nowhere near it.

Specifically, consider placing at least a portion of your wealth in real assets.

And avoid holding the preponderance of your assets anywhere that the government is insolvent.

Parking your wealth in a country that’s bankrupt substantially increases the risk of bail-ins and capital controls (as we saw in Greece, Cyprus, etc.).

Again, it’ll be easy to look back and see how obvious the warning signs were.