IRS to revoke 362,000 passports from US citizens 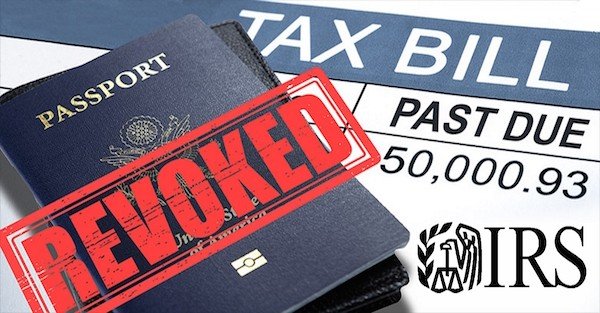 About two and a half years ago, I told you about a particularly nasty piece of legislation that President Obama quietly signed into law towards the end of his administration.

They called it the “FAST Act”, which stood for Fixing America’s Surface Transportation.

Yet despite $300 billion earmarked for infrastructure repairs, they didn’t manage to fix very much of America’s surface transportation.

The legislation did, however, have two major effects:

1) The FAST Act authorized the US government to plunder excess capital from the Federal Reserve… which is about as stupid as thing as anyone could possibly do.

The Federal Reserve is America’s central bank; they control the value and fate of the US dollar… which is still the most dominant currency in the world.

You’d think that having some excess cash on the Federal Reserve’s balance sheet would be viewed as wise and conservative.

These guys are so broke, they’ll grab every penny they can get. Even from their own central bank.

So they buried a provision into the FAST Act demanding that the Federal Reserve hand over any excess capital to the Treasury Department at the end of every calendar year.

This is one of the reasons why, to this day, the Federal Reserve is borderline insolvent… which hardly inspires confidence.

Now, I could go on for quite some time about what an idiotic idea this was.

But believe it or not, there was an even worse section of the FAST Act– one they only started implementing recently:

2) Section 32101 of the FAST Act required the US State Department to revoke or deny the passport of any taxpayer that the IRS deems to have “seriously delinquent tax debt.”

They define seriously delinquent tax debt as owing $50,000 or more.

Well, it took them a couple of years, but the IRS has finally started enforcing this law.

Earlier this month the IRS acknowledged that they had sent at least 362,000 names to the State Department to start revoking or denying passports.

And that’s just the beginning.

The IRS is sending these names out ‘in batches’, so there will be many more to follow. They hope to be finished by the end of the year.

Now, there are so many things wrong with this.

Your name could accidentally end up on some list because the IRS couldn’t keep its own records straight. Or there was a problem with the data integrity. Or someone simply mismatched one John Smith for another.

The IRS literally has billions of records being managed by antiquated technology that’s prone to data breaches.

The idea that they could come up with a list of hundreds of thousands of people without making a single mistake is just farcical.

But, again, there are few real checks and balances. You end up on a list… at which point you’re arguing with an entirely different agency about why your passport has been revoked. It’s a bureaucratic nightmare.

The larger point, though, is what this really means about citizenship.

Think about it– a passport is the most common document to evidence an individual’s citizenship.

And… poof… they can take it away from you with the click of a button.

To me, if they can take something away so easily, then it wasn’t really yours to begin with.

If you own your home… think again. Even if you have your mortgage fully paid off, you still have to pay property tax.

This means that it’s ultimately the government who really owns your property. You’re just renting it from them.

And if they believe (in their sole discretion) that you owe them property tax, they’ll take the property away from you.

Likewise, the enforcement of the FAST Act shows that you’re not even really a citizen. You’re just renting your citizenship from the government.

And if they believe (in their sole discretion) that you owe them income tax, they’ll take it away from you.