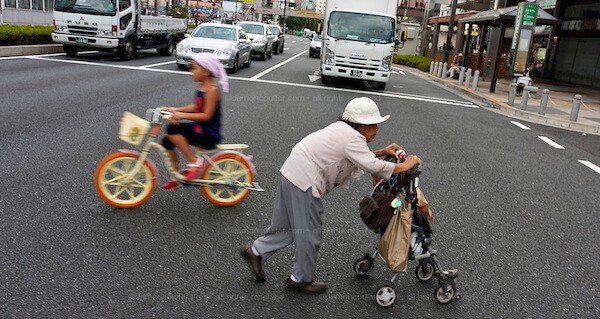 She served her time. Got released. Then shoplifted again so that she’d go back to prison.

She’s now 89 years old serving out another 2 ½ year sentence, not too far away from where I am right now, at a women’s prison about 60 miles outside of Tokyo.

She’s not the only one.

One in five female prisoners in Japan is senior, almost all of whom have been convicted of petty crimes like shoplifting.

This is no accident. Elderly women in Japan are economically vulnerable. Half live below the poverty line. Many live by themselves and have no one to turn to for help.

So there’s a growing trend in Japan of elderly women deliberately committing petty crimes– hoping to get caught so that they’ll be sent to prison.

In prison, of course, they’re fed, clothed, housed, and even have their health care covered by the state.

It’s also a sad example of what happens when a nation’s economy goes bust after a dangerous, explosive, unsustainable boom.

This country had pulled itself out of the ashes of the atomic bomb in World War II and set itself on a path to dazzling economic growth.

Within a few decades, Japan had become one of the wealthiest nations in the world. And by the 1970s, they began flexing that economic might.

If you’re old enough you might remember the Japanese scare, especially in the early 1980s, as Japanese companies were buying up huge chunks of US real estate, businesses, etc.

Japan had all the money… and it seemed like they were going to conquer the world.

The Japanese stock market was soaring. Japanese property prices were, by far, the most expensive on the planet.

Then it all went bust in the late 80s.

It turned out that Japan’s massive economic boom had been fueled by years of unsustainable monetary policy– the central bank simply conjuring trillions of currency units out of thin air.

The country had been flooded with money. Bank balance sheets were stuffed full of trillions of yen and they began liberally loaning out– practically giving away– money to businesses and investors.

They were able to get away with it because Japan’s economy was healthier than the rest of the world’s.

The US was going through a series of deep recessions. Japan, meanwhile, was a production and export powerhouse.

So even though the Japanese central bank was printing unlimited quantities of paper money, the rest of the world readily accepted it.

But by the late 1980s, the giant Japanese monetary bubble burst. Everything crashed. Stocks. Property. The economy itself.

Three decades later it has yet to recover.

We’ve talked about this before: Japan is a classic example that the good times NEVER last forever. (And it’s important to plan accordingly.)

Moreover, Japan teaches us that financial and economic downturns can last for DECADES.

A lot of people understand that stock markets and economies move in cycles– periods of boom and bust.

But there’s a common misconception that the ‘bust’ part of the cycle will be short-lived, maybe a few months, 1-2 years at most.

Japan shows that downturns can be more severe, and last longer, than anyone could possibly imagine.

Last, Japan is a monument to the serious social consequences that unfold when a long-term economic downturn strikes.

This sad story of poor, lonely, elderly women deliberately committing crimes so that they’ll be taken care of in prison is just one example.

On the other end of the age spectrum, younger people in Japan have stopped having children.

Due to the long-term economic downturn, Japan’s young adults don’t have the financial stability to get married and start families, and the birth rate has been declining as a result.

Last year, in fact, the number of babies born in Japan was the lowest number EVER in the 118-year history of their public records.

And this shrinking population has its own long-term consequences– a lower tax base, fewer workers paying into the pension system to support retirees, etc.

On top of it all, Japan’s long-term economic downturn has obliterated the finances of the government.

The Japanese government has to borrow appalling amounts of money in order to make ends meet each year.

The national debt here has become so large that it’s more than twice the size of the Japanese economy.

Plus it takes the government more than 20% of tax revenue each year just to pay INTEREST on its debt– and that’s at a time when rates are actually NEGATIVE.

This country is really amazing, I’ve always loved it here.

But Japan has been suffering for a long, long time, both socially and economically. The two go hand in hand.

That makes this place the most important case study in the world.

Because everything that Japan did back in the 70s and 80s to cause these long-term social and economic problems is EXACTLY what most of the West is doing now: printing money, keeping rates too low, inflating asset bubbles, going into debt, and acting like the good times will last forever.

It would be utterly foolish to believe that this time is different.