Lenin would be so proud 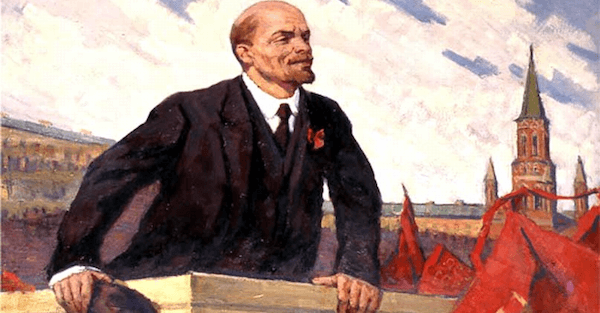 In fact, bank lending standards were so loose back then that there were some infamous cases of people who DIDN’T have a pulse who were still able to borrow money.

That’s right. Some banks were so irresponsible that they actually loaned money to dead people.

Of course, it turned out that lending money to dead people… or people with terrible credit who had a history of default, was a bad idea.

And the entire financial system almost blew up as a result of this reckless stupidity.

But then something even crazier happened: the Federal Reserve came in and bailed out all the banks with trillions of dollars of free money.

That was utterly nuts. Instead of being wiped out by their idiotic mistakes, the banks learned that they would always be bailed out no matter how stupid or greedy they acted.

The key lesson was that there would be zero consequences for bad behavior.

So if the Fed is going to step in with a bailout every time banks screw up, why bother being conservative and responsible?

That’s why we’re seeing the same mistakes over and over again.

We talk about some of the most notorious cases like WeWork and Netflix regularly in this letter… but there are countless other examples.

Even worse, banks and other financial institutions even loaned money to Argentina (a country that has defaulted EIGHT TIMES on its debt), buying government bonds that have a maturity of 100 years!

Hey, if they screw up and the investment goes bad, they’re going to be bailed out anyhow.

That’s not the way capitalism is supposed to work. Stupid decisions are supposed to be punished.

Market crashes, recessions, and economic downturns are nature’s mechanism to wipe out all the unproductive, useless businesses… and the investors who funded them… making way for new, better businesses to flourish.

But there are always bureaucrats and politicians who feel that no one should ever lose. It’s like the economic equivalent of a participation trophy… no one should go home empty handed.

And if we print enough money and put enough safety nets in place, everyone will win, nobody will lose, and we’ll all link arms and sing kumbaya.

Economist Roger E.A. Farmer, for one, doesn’t think the Fed did enough after the financial crisis 10 years ago by dropping interest rates to zero and printing trillions of dollars to bail out the economy.

Moreover, he thinks the Fed should step in and start buying stocks to prop up the stock market.

Japan is a notable example.

The Bank of Japan, the biggest offender to date, is a top-10 shareholder in nearly half of the companies that trade in that country’s stock market.

It hasn’t really worked. Japan can’t seem to get out of its low-growth economic morass.

But according to Farmer, this failure is because Japanese authorities haven’t bought ENOUGH stock.

Apparently he won’t be satisfied until the Japanese government owns 100% of ALL the companies in Japan.

And he wants to apply that same strategy to the US economy.

Farmer also thinks that the US government should ban investors from trading US stocks, essentially creating a government monopoly of the stock market.

What a great idea.

While we’re at it, in fact, we should also have the government start buying  houses in order to prop up the real estate market.

The government could also bail out every small business that fails to make sure no one ever loses a job. It could buy up all the automobiles and hand them out to people who need cars to get to work.

In all seriousness, this lunacy is all based on the premise that recessions and corrections are bad (and should be avoided).

Recessions, corrections, depressions… they’re all critical phases in the market. The whole purpose is to wash out all the excess and punish people that have been stupid.

If you don’t have consequences for stupid actions, you erase good judgment.

And that’s the greatest hazard of all… to think that you can do whatever you want and there will always be someone to bail you out if things go bad.

Not to mention, this whole idea of the government owning all the businesses and assets has already been tried before.

It was called the Soviet Union.

Lenin would be so proud.