Meanwhile, over in Zimbabwe. . . 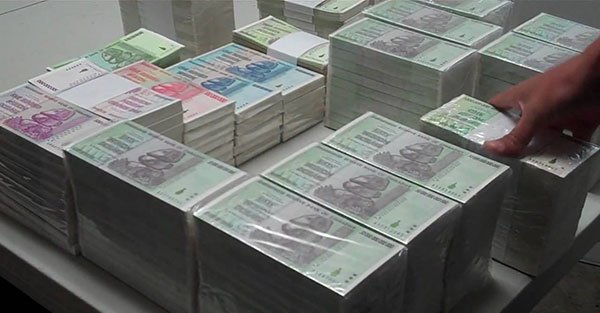 On April 12, 2009, the government of Zimbabwe officially abandoned its currency.

You probably remember the stories; starting in the early 2000s, the Zimbabwe central bank began printing massive quantities of money in order for the government to make ends meet.

This resulted in one of the worst episodes of hyperinflation in modern history.

Zimbabwe’s rate of inflation in 2001 was more than 100%. Prices basically doubled.

But that was nothing.

At its peak in 2009, Zimbabwe’s inflation was estimated at 89.7 sextillion percent, which looks like this:

Eventually the government finally capitulated and chose to abandon its currency altogether.

And for the next several years, Zimbabwe had no official currency.

People transacted in dollars, euros, South African rand, Chinese renminbi… any foreign currency they could get their hands on.

But a few months ago the government of Zimbabwe decided to give it another try.

They created a new type of currency they’re calling a “bond note”, which is basically
Zimbabwe dollar version 2.0.

It’s been barely two months since the bond notes debuted, but people are already losing confidence.

There was even a recent story in which a government agency refused to accept its own bond notes as a form of payment.

It seems Zimbabweans have adopted a ‘fool me twice, shame on me’ attitude. They’re skeptical.

The bond notes are supposed to trade at parity with the US dollar, i.e. a $5 Zimbabwe bond note is supposed to be the same as $5 USD.

The government has absolutely nothing to back up this assertion, other than the usual tactics of coercion and intimidation.

They’ve threatened to throw anyone in jail who’s caught trading bond notes at anything other than the official 1:1 exchange rate.

Naturally these threats have only spurred the creation of a black market where Zimbabwe’s bond notes are bought and sold at their real values.

Right now the bond notes are trading at 5% to 10% below the US dollar. But this is just the beginning.

But here’s the important thing to remember: it’s not just Zimbabwe.

Just about EVERY country plays games with its currency.

The primary difference boils down to one thing: confidence.

When the US Federal Reserve or Bank of Japan conjures money out of thin air, people still confidence in those currencies.

And western central bankers have not been shy about abusing that confidence in extremis.

In the United States, the Federal Reserve has printed so much money that its capital reserves constitute a mere 0.88% of its balance sheet.

The Fed has essentially rendered itself nearly insolvent.

And in Japan, not only are interest rates negative, but the central bank has resorted to mass-buying of shares on the Tokyo Stock Exchange, to the point that the central bank is now a top 5 shareholder in more than 80 of Japan’s largest companies.

And yet, investors somehow still remain confident that these central bankers know what they’re doing.

Now that is some serious snake-charming talent.

You really have to hand it to these central bankers.

They have managed to convince some of the most financially sophisticated people in the world that these desperate tactics, which are fundamentally no different than what Zimbabwe did, will somehow result in zero consequences.

Perhaps it will continue to be this way.

Perhaps the confidence in western central banks will last forever no matter how crazy their shenanigans become.

Perhaps there will never, ever be any consequences from their reckless behavior.

And perhaps the New England Patriots will decide to ditch Tom Brady this weekend and put me in the game as their starting Superbowl quarterback.

A boy can dream.

These central banks have managed to make it this far on smoke and mirrors. Kudos for that.

But the old adage of investing holds true in central banking as well: past performance is no guarantee of future results.

There is absolutely zero reason to presume that central banks can maintain course without consequence.

And last time I checked, there was a ton of uncertainty in the world which could potentially shatter that confidence.

It certainly behooves any rational person to look at the big picture and take some sensible steps to distance yourself from the risks.

A decision to own gold and silver, for example, is a conscious choice to trade paper currency (i.e. a liability of a central bank) for something that’s real.

There are countless other options.

If you have the technological understanding, for example, cryptocurrency may be a viable option.

There’s no reason to panic or hastily dump your entire life’s savings into any alternative asset.