Meanwhile, over on Planet Japan 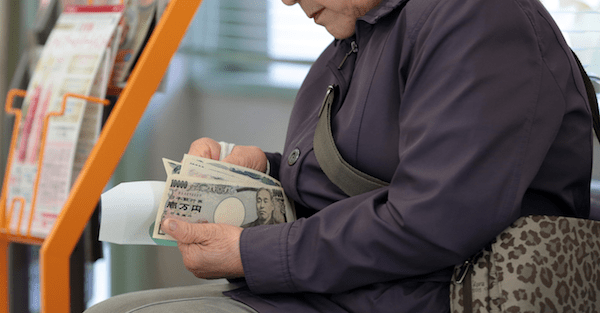 It was only a few days ago that the Japanese government’s Financial Services Agency published its oddly-titled “Annual Report on Ageing Society”.

(Like everything in Japan, English translations often hilariously miss the mark…)

This is a report that the Ministry of Finance puts out every year. And as the name implies, the report discusses the state of Japan’s pension fund, and its future prospects for taking care of its senior citizens.

In a nutshell, this means that Planet Japan has more people collecting pension benefits, for more years, than anywhere else.

Yet at the same time, Japan’s pension fund is completely insolvent. There simply aren’t enough people paying into the system to make good on the promises that have been made.

At present there are only 2 workers paying into the pension program for every 1 retiree receiving benefits in Japan.

The math simply doesn’t add up, and it’s only getting worse. Planet Japan’s birth rate is infamously low, and the population here is actually DECLINING.

So, fast forward another 10-15 years, and there will be even MORE people collecting pension benefits, and even FEWER people paying into the system.

This year’s ‘Annual Report on Ageing Society’ plainly stated this reality; it was a brutally honest assessment of Japan’s underfunded pension program.

The report went on to tell people that they needed to save their own money for retirement because the pension fund wouldn’t be able to make ends meet.

This terrified a lot of Japanese workers and pensioners.

So the government stepped in to quickly solve the problem… by making the report disappear.

Prime Minister Shinzo Abe apologized for the report, calling it “inaccurate and misleading.”

And Finance Minister Taro Aso– himself a pensioner at age 78 (though in typical Japanese form he looks like he’s 45)– simply un-published the report.

It’s no longer available for download on the website. It just went away. Finance Minister Aso-san followed that up by saying the report was inappropriate because it used words like ‘shortfall’.

I find this so incredible; it’s not like this pension problem is a tiny issue quietly lurking in the corner. This is an ENORMOUS challenge. And they’re pretending like it doesn’t exist.

It’s as if Godzilla is rampaging through Tokyo and everyone just plugs their ears singing “lalalalalala”.

Obviously this is not an issue that exists solely on Planet Japan. Most of the world has insolvent pensions.

Worldwide, the total public and private pension gap is tens of TRILLIONS of dollars. Nearly every government and corporate pension has made promises it cannot keep.

In the United States alone, the government’s own calculations estimate that Social Security is underfunded by $53.8 TRILLION.

And the problem isn’t getting any better. Birth rates keep falling, and for the first time, next year, the worker-to-retiree ratio will reach 2.7, below the necessary 2.8 workers to sustain the program.

Europe is no better off. For example, Greece and Russia have ALREADY had to make adjustments to their pension payouts.

It’s clear as day: pensions are promises that governments will not be able to keep.

Eventually, it’s a reality people are going to face. And most countries – like the US, Japan and most of Europe – willfully and dangerously chose to ignore it.

So here is the news: the younger you are, the more likely you’ll spend your entire career paying into a pension system that won’t be there when it’s your turn to collect.

That makes it even more important to save.

While every country has different rules, there are always ways to make sure you don’t become a victim of someone else’s stupidity.

Annuities in Australia, RRSPs in Canada and solo 401(k)s in the United States are just a few of these options that give you much more flexibility than a traditional retirement account.

You could buy cash-producing real estate or start a side business selling something on Amazon, and stuff all that extra income into tax-advantageous retirement funds.

Even if governments somehow find a miraculous way to save the system, you’ll never be worse off having set aside more money for retirement.

But it’s a near mathematical certainty that most government-sponsored retirement funds are going bust. Taking matters into your own hands is the obvious solution that absolutely everybody should consider.