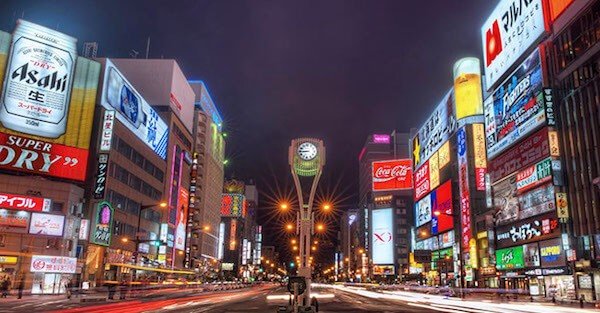 After having traveled to more than 120 countries in my life, the only person I know who’s been to more places than I have is Jim Rogers.

Jim is a legend– a phenomenal investor, author, and all-around great guy.

(His book Adventure Capitalist is a must-read, chronicling his multi-year driving voyage across the world.)

Some time ago while we were having drinks, Jim remarked that he occasionally tells people, “If you can only travel to one foreign country in your life, go to India.”

My answer is different: Japan.

To me, Japan isn’t even a country. Japan is its own planet… completely different than anywhere else in ways that are incomprehensible to most westerners.

(Watch my friend Derek Sivers explain it to a TED audience here.)

On one hand, this is a culture that strives to attain beauty and mastery in even mundane tasks like raking the yard or pouring tea.

Everything they do is expected to be conducted to the highest possible standard and precision.

They start the indoctrination from birth; Japanese schools typically do not employ janitors and instead train children to clean up after themselves.

Later in life, the Japanese salaryman is expected to practically work himself to death (or suicide) for his company.

Obedience and collectivism are core cultural values, and the tenets of Bushido are still prevalent to this day.

One of the most remarkable examples of Japanese culture was the aftermath of the devastating 2011 earthquake (and subsequent tsunami) in the Fukushima prefecture.

It was the worst natural disaster in Japanese history, causing nearly as much damage as the atomic bombs over Hiroshima and Nagasaki in 1945.

Yet rather than panic and pillage, the Japanese sat patiently outside of their ravaged homes waiting for direction from the local authorities.

Then again, this is also the place that brought us ‘Hello Kitty,’ and where men have to be admonished to not grope young girls on the subway.

The Japanese paradox also applies to its economy, which has effectively been in stagnation for nearly 30 years.

Japan’s government debt is more than 1 QUADRILLION yen (over $10 trillion) and more than twice the size of the entire economy.

This debt is so large that in the 2018 budget that was just released last month, the government reported that it will take more than 40% of tax revenue to make debt payments this year.

Despite such gruesome figures, however, there is no panic here on Planet Japan.

The government has told everyone to not worry, and that seems to be good enough.

Banks and investment funds continue to plow their depositors savings into government bonds– which, by the way, carry NEGATIVE interest rates.

In other words, investors are loaning money at rates which are less than zero to a government that’s so heavily indebted it has to spend 40% of its tax revenue just to make debt payments.

This is pure insanity. But on Planet Japan, it’s perfectly normal behavior to engage in ritualistic financial suicide.

It wasn’t always this way.

After being demolished by the Allies in World War II, Japan set out to rebuild itself.

And the growth that came out of the next several decades was so astonishing that it became known as the economic miracle.

And there certainly was cutting edge technology and productivity that contributed to that success.

Back then, some of the most popular consumer products in the world like Nintendo’s original game console, or the Sony Walkman, were Japanese.

And Japan’s production efficiency was the envy of the world.

But underpinning all that growth, especially during the later part of the boom in the 1980s, was a tidal wave of paper money.

And, as with most cases where central banks conjure too much money out of thin air, the Bank of Japan created a dangerous asset bubble.

With so much money in the system, the prices of nearly everything– stocks, real estate, etc. skyrocketed.

The asset boom made people feel very wealthy, and that the good times would last forever.

And over the next few years, the giant economic bubble rapidly deflated as the central bank gradually ‘tightened’ the money supply and raised interest rates.

Within two years the Nikkei 225 had lost half of its value. Within a few years more it had fallen to as low as 8,000.

During the boom, some Japanese investors and businesses were astute enough to trade some of their overvalued yen for undervalued foreign assets while they still had the chance.

They bought real estate in California, businesses in Europe, etc. These investments ensured their prosperity even after the Japanese market collapsed.

But most Japanese kept all of their eggs in one basket. And they still haven’t recovered their losses.

Problem is, most folks tend to believe that market corrections will be very short lived, as if asset prices will fall 20% or 30% and then be right back to where they were before after a year or two.

Few of us can imagine the value of their retirement accounts collapsing– and NEVER recovering.

… and that, when asset prices are at all-time highs, a prudent person ought to consider taking some money off the table and seeking undervalued alternatives.