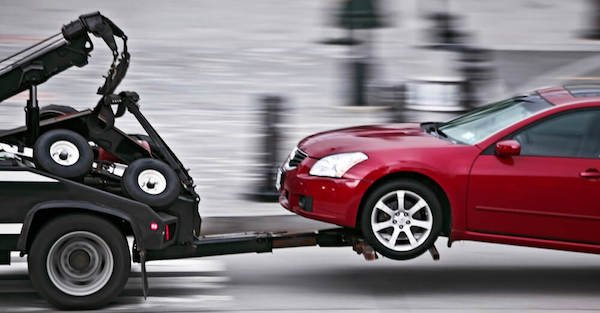 Imagine dropping your car off at the local mechanic because you need to get your engine tuned up.

A few days later you come back to pick up your car, only to find out that it has been impounded by the police.

That’s what happened to one couple in Chicago.

It turned out that one of the mechanics took their car out for a joy ride. He was driving too fast, was pulled over, and arrested for driving without a license.

The police then impounded the vehicle, even though it wasn’t his.

The couple went down to the police station to get their vehicle back, but the police insisted that they pay thousands of dollars, even though they did nothing wrong.

Meanwhile, the police are charging them storage fees to keep the vehicle in the impound parking lot.

The couple managed to scrap together the money to have their vehicle released… only to find out that the police had already sold it at an auction!

This wasn’t an isolated incident either. The City of Chicago does this countless times per year, for offenses as minor as littering and playing loud music.

(Chicago brings in about $28 million per year impounding cars and running up storage fees.)

Now the Institute for Justice is helping the couple lead a class action lawsuit challenging this Civil Asset Forfeiture racket.

They argue the scheme violates due process, by forcing innocent vehicle owners to account for crimes drivers committed. Plus, holding the vehicles ransom until fines are paid is an unconstitutional seizure.

An US federal appeals court recently ruled that when police suspect a driver of Operating While Intoxicated (OWI), officers can search the vehicle for drugs and other contraband.

This applies even if police have no reason to suspect that there are any illegal substances in the vehicle.

This may sound like a small issue, but it is another example of the Fourth Amendment being chipped away.

Police are supposed to have a very narrow latitude to search you. Everything they do must be justified by reasonable suspicion related to a specific offense.

Smelling alcohol on your breath isn’t supposed to give them carte blanche to turn your vehicle inside out.

Autoerotic asphyxiation is the process of intentionally strangling yourself (or being strangled) for sexual pleasure.

The goal is to limit airflow to the brain to cause a euphoric feeling, but restore airflow before you suffocate and die.

Sometimes people go a little bit too far, and actually die in the process.

But some life insurance companies are not willing to pay out benefits for accidental deaths related to this fetish.

One widow was paid out most of her husband’s death benefits, but could not collect the extra coverage for accidental death. The insurance company said that they will not pay because the death resulted from an “intentional self-inflicted injury.”

So she sued. And the latest court ruling sided with the insurance company. But the courts have already flip-flopped twice on this one case.

Other courts have had similar disagreements, which come down to the semantic meaning of a word.

Clearly autoerotic asphyxiation is intentional and self-inflicted. But is the desired result correctly categorized as an injury? Or is an injury an undesired side effect?

Either way it will be entertaining to watch when the Supreme Court picks up the issue.

Warren Buffett had some choice words for America’s worst corporation

We’re not the only ones who have noticed just how horrible large banks can be.

Warren Buffett and his partner Charlie Munger usually take some time at the Berkshire Hathaway annual meeting to offer their advice to large companies.

They said the reason Wells Fargo has faced so many scandals over the past few years is because they hire leadership from Wall Street instead of community bankers.

Employees even opened accounts and transferred customers’ money into them without telling the customers, all to get bonuses.

Most likely, they said, the big banks will maintain the status quo… because the short-term financial incentives of bank executives are completely misaligned with those of the customers and long-term interests of shareholders.