On the ground in Sydney, right in the midst of the hostage incident 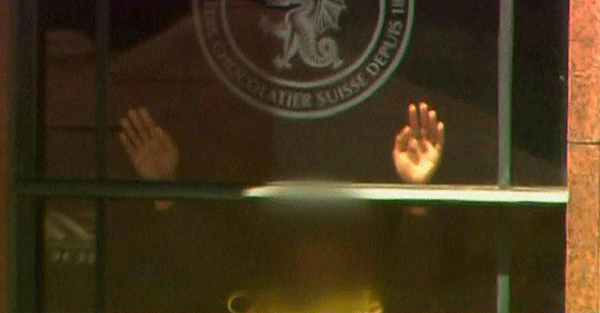 As I was preparing to go and meet a friend who runs a nascent fund management business in Sydney yesterday, I noticed there was a lot of unusual activity going on a block or so from my downtown hotel.

Turns out an armed man had entered a busy café in the heart of Sydney’s central business district and was holding a bunch of people hostage.

The location was obviously chosen for maximum media exposure. It was right opposite the studios of Channel 7, one of Australia’s three big commercial television stations, and right in the center of the city, near offices, and the Pitt Street shopping district, which ordinarily would have been teeming with Christmas shoppers.

Before long, all sorts of rumors began flying. I began getting texts and emails from worried friends and family from all over the world.

I sauntered past the crowds gathering around the “exclusion zone” the police had set up and went to my meeting, avoiding police roadblocks on the way.

What was immediately apparent to me was that NOBODY really knew what was going on. And despite people leaping to all sorts of wild conclusions, all the reporting on the incident was mere speculation.

The police may have known more facts, but they were not letting any news filter out.

Everyone was in the dark, leading to speculation that it was a “terrorist attack” organized by militants affiliated with “Islamic State,” or IS.

That the gunman had made some of his hostages hold up a banner in the window with a verse from the Koran sent the whole world into a tizzy.

Though this banner has in recent times been misappropriated by certain jihadist and militant groups – from discussions with my Muslim friends – in reality it is nothing more than the Muslim equivalent of a Christian holding up a crucifix.

The Prime Minister of Australia came onto live TV and gave a press conference talking tough about national security, about not caving in to threats to our “way of life,” and so on, and urged people to “carry on with the lives as normal.”

No one seemed to be listening, though. All the offices around the area evacuated their staff and told them to go home for the day.

I tried to go to the bank to deposit a check. No luck. All the banks in the CBD had also shut for the day. They even shut the Apple Store, which on a normal day is usually packed.

Tragically, overnight two of the hostages were killed, along with the lone gunman, in what I would term a botched police operation. But the mainstream media are spinning it somewhat differently.

The hostage taker turns out to be a long-term Australian resident who came as a refugee from Iran in the 1980s, and has had numerous arrests and run-ins with the police.

Far from being a part of an organized Islamic terrorist group, the man seems to be a lone loony tune.

But contrary to the Australian Prime Minister’s call to “carry on as normal,” fear and paranoia won the day. The whole of downtown Sydney was shuttered.

And my larger concern is that this will become a rallying cry to implement all sorts of draconian security requirements in the future.

It’s a controversial topic. And we’d be interested to hear… what do you think?