One of the greatest follies from the last crisis is back 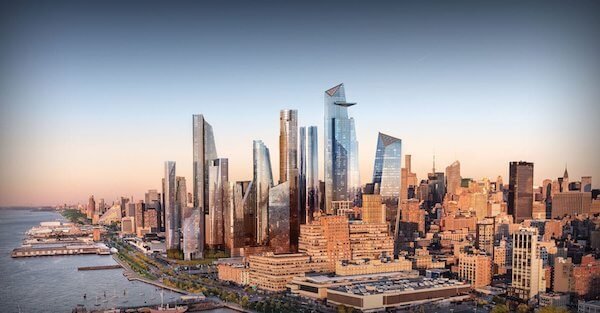 Hudson Yards is a gigantic real estate project on New York City’s western edge that will be the most expensive development in US history when it’s completed in 2025.

At $25 billion, the project costs more than the size of the entire economy of Iceland… which is saying a lot given that Hudson Yards is only 28 acres… literally one millionth the size of Iceland.

According to the plan, in seven years (so they say) Hudson Yards will be a neighborhood of gleaming towers with high-end retail, fancy law firms and private equity shops, overpriced apartments, and ridiculous works of art like “the Vessel”.

The Vessel is basically a giant woven staircase made from copper; it stands 15 stories, weighs 600 tons and has 2,500 climbable steps inside.

And this stairway to nowhere cost more than $150 million.

As the development company’s founder Stephen Ross told Forbes, “[Hudson Yards is] not all about the money, really, it’s about transforming something and what you leave behind.”

But I would add Rule #3 of investing: Anytime someone says “it’s not about the money”, you should run away. Quickly.

Now just think back to the last time a development was stealing headlines for being “the most expensive in US history.”

It was 2004. In Las Vegas. And the development was MGM Mirage’s City Center – a 67-acre playground on the Las Vegas Strip.

The development, and its 16.7 million square feet of casinos, retail, hotels and condos, was supposed to cost $4 billion. Construction started in 2006. City Center opened in late 2009, just in time for the Financial Crisis.

And the final bill for the Las Vegas City Center clocked in above $9 billion—a full $5 billion above budget.

(Remember, the Hudson Yards developer says their project will cost $25 billion… meaning the real cost will probably be north of $40 billion…)

City Center was the ultimate “top of the market” project – an extravagant, gaudy and debt-fueled mega development.

Two years after construction started, the Great Financial Crisis hit. And the project went to shambles.

They say history doesn’t repeat itself, but it often rhymes.

And almost exactly 10 years since Lehman Brothers collapsed and the financial crisis kicked off,f we’re back where we started, only with a more ambitious (and far more expensive) development in New York City.

And investors, banks, pension funds, etc. are so desperate for a decent investment return that they’ll lend money to a project of unprecedented size in one of the most expensive cities in the world that isn’t going to open for at least another seven years.

As we saw with City Center, a lot can happen between the time you break ground and complete a project.

We discussed this in yesterday’s Notes about billionaire investor Howard Marks and his concerns about the economy today.

As of June, U.S. non-financial firms are sitting on a record $6.3 trillion in debt.

AT&T alone has an astounding $180 billion of debt, making it the most indebted non-government controlled and non-financial firm in history… and more indebted than many governments around the world.

And the quality of corporate debt is getting worse and worse.

More than 40% of US corporate bonds are rated BBB – just one notch above non-investment grade, or “junk” – an all-time record. The riskiest, “junk” borrowers, have a record $8 of debt for every $1 of cash on their books.

A full 14% of companies in the S&P 500 don’t even make enough money to cover the interest on their debt.

You’d think with all of this bad debt floating around that investors would at least require a healthy interest rate to compensate them for taking so much risk.

But no. Interest rates on these loans are still near historic lows– so low they barely even exceed the rate of inflation.

It’s all risk, and very little reward, rolled up into a gigantic balloon of ever-expanding debt.

Eventually it all breaks down. It always does. Debt cannot escalate forever… idiotic projects that have no business being funded cannot persist forever.

Today we’ve got all the same ingredients: too much debt, too many complicated financial instruments that encourage more debt.

Just take a look at Hudson Yards. Can we honestly expect this time to be any different?