One of the world’s last great boomtowns 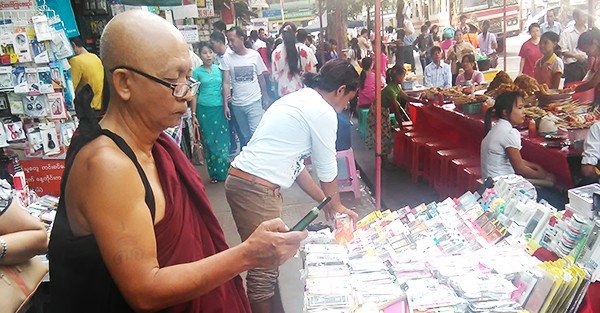 Since so much of Asia is on holiday for the Lunar New Year, I decided to travel to Myanmar to check out how the economy is developing.

Myanmar was once the wealthiest economy in Southeast Asia. But decades of isolation and military rule have turned it into the poorest.

Myanmar is, no doubt, the Cuba of Southeast Asia.

For the last few years, however, the country has started emerging from this isolation. The military government has begun to relax its stranglehold and play nice with the rest of the world.

Just since my last trip to the country a few years ago, I can hardly believe the extraordinary progress.

A few years ago there was hardly any mobile phone coverage. All bandwidth was strictly controlled by the Army, and we pitiful civilians had no access to the network.

As late as 2013, only 7 in 100 people had a mobile phone. Now every second person in Yangon has one– usually a new Chinese-made smart phone.

A local SIM card, with 1GB of data, valid for one month can be purchased for about $6.

(That might sound cheap, but $6 is expensive in Myanmar compared to local wages. But mobile service prices are falling fast.)

Mobile technology is becoming an indispensable part of the economy.

Yesterday we stumbled upon an enterprising young lady from the Dala district, on the south side of the Yangon River from the downtown area, who offered to take us on a tour of the district.

She was able to line up rickshaws, make appointments, and keep in touch with all the people we met along our route, all from her smartphone while in the pedicab.

This was an impromptu tour, completely unplanned by us, so she had to think quickly and get things done as we travelled along.

Just three years ago, this would have been completely impossible.

Before, not even the few 5-star hotels in Yangon could accept credit card payment.

That was partly due to international sanctions against Myanmar (so VISA, AMEX and MasterCard were banned from doing business with the country), and partly due to lack of payments processing technology.

But, that’s all changed, too. My friends and I have been regularly withdrawing cash from foreign bank accounts at the ATMs here.

To be clear, there are still plenty of challenges for the country, as it struggles to emerge from over 50 years of isolation and disastrous economic policies.

Wandering around the derelict shells of what used to be magnificent, colonial style buildings in downtown Yangon, it serves as a clear reminder of how civilization can, and sometimes does decline.

The stench coming from the open sewers next to the pavements was a pungent reminder that the basic infrastructure of the city has not changed a great deal since the 1960s.

(On the positive side, there is a certain old world charm to Myanmar that doesn’t exist in too many other places around the world. In this respect it is very reminiscent of Havana.)

One thing above all is clear to me, though. For all its richness in oil, gas, timber, minerals, gems, soil, water, etc., Myanmar’s greatest asset is its people.

I have found people from all walks of life here to be open, honest, friendly, and, in most cases, hardworking and industrious.

Given the right tools, technology, and sufficient investment capital, this country truly does have an exceptionally bright future.

Fortunes will be made here, both by enterprising locals, as well as foreigners who have the foresight to invest wisely in one of the world’s last great boomtowns.