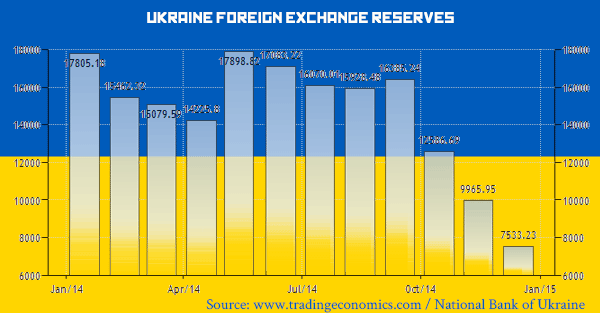 What a surprise! It turns out that endless military conflict, corruption, and epic fiscal mismanagement can take a serious and rapid toll on an economy.

Ukraine started off last quarter with $16 billion in foreign reserves; today they have $7.5 billion. That’s a 54% decline in just 3 months, losing 24% in just the last month alone.

So the trend is not only getting worse, it’s accelerating. They’re not only heading over a fiscal cliff, they’ve put the pedal to the floor.

Foreign reserves are essentially a measure of a government’s savings. It’s how much gold, foreign currency, and other forms of savings they have stocked away.

It’s the stuff they need to do business with the rest of the world. When a country runs out of it they’re in for an absolutely epic crisis.

Like the old joke about Brazil, Ukraine is the country in Europe with the most potential. And it always will be.

Despite having well-educated and inexpensive labor, loads of natural resources, and a favorable tax regime to attract foreign investment, they never seem to get it right.

The country is legendary for its corruption. In Ukraine both the government and the banks are literally controlled by the mafia.

After all, why waste time with extortion and gambling when you can just print money and tax the citizens?

Ukraine has had a very difficult road. All the conflict, wasteful spending, debt, and decrease in reserves has taken its toll.

All this sounds pretty terrible, until you look at the numbers and realize that the United States has even less in foreign reserves, more debt, and of course is engaged in its own endless military conflict.

These are facts. And it’s incredible how greatly one country suffers the consequences, while the other one doesn’t.

How has that happened? At the end of the day it all comes down to confidence.

People choose to maintain confidence in the US government, the US dollar, and US banks. Even when the data shows that the Land of the Free is worse off than Ukraine.

Confidence however is a fickle beast and can move on whenever there is a change in the direction of the wind.

Now, I’m not suggesting that the US will turn into Ukraine.

But with such negative fundamentals, it certainly makes sense to at least consider whether its worth holding the entirety of your net worth, all of your opportunity, all of your livelihood, all of your family’s security in a bankrupt country?

After all, you wouldn’t bet it all on Ukraine. Look at the data and ask yourself if there’s a difference.

The world is a big place. There are plenty of opportunities to diversify abroad… places with stronger banking systems, less debt, and more economic freedom.

There’s no need to take everything you worked for your entire life to achieve and gamble it on a bankrupt government.