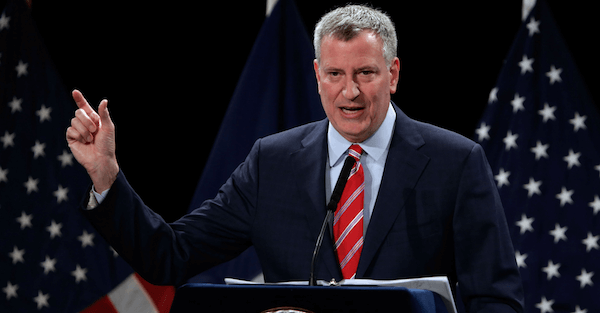 Grab your wallets. Bill de Blasio, the Mayor of New York City, may be lining up a presidential run. And in his State of the City speech last Thursday, he gave us a peak of what the future could have in store…

The Mayor of New York City doesn’t think the people who earn the money should get to keep it.

For the time being, New York City is still the financial capital of the world, despite Bill de Blasio’s best efforts to change that.

This guy is as far left as they come. And he doesn’t try to hide it.

He traveled to Nicaragua to support the socialist Sandinistas back in 1988. (The same socialist leader, Danny Ortega, is still in power and currently on a mass killing spree).

De Blasio wants to guarantee health care for everyone in New York City, including illegal immigrants.

He even wants to seize buildings from bad landlords (if we took property away from every landlord that had a complaint filed against them, I don’t think we’d have any left).

In a 2017 interview, he told New York Magazine:

What’s been hardest is the way our legal system is structured to favor private property. I think people all over this city, of every background, would like to have the city government be able to determine which building goes where, how high it will be, who gets to live in it, what the rent will be.

I think there’s a socialistic impulse, which I hear every day, in every kind of community, that they would like things to be planned in accordance to their needs. And I would, too.

De Blasio believes in a top down centrally planned society from the bottom of his heart. He thinks every facet of life should be regulated and controlled by the government.

He signed a bill that forces Airbnb to hand over information on every host and every transaction. Already NYC is one of the most restrictive places in the country when it comes to Airbnb, and the city spends up to $7 million per year enforcing these rules.

Plus New York City residents are already paying one of the highest tax rates in the country. In addition to federal and (high) state taxes, they owe a city wide income tax. In the end, over half of their money already gets confiscated by various governments.

But that’s not enough for Bill. And that’s no surprise given the agendas he’s pushing forward like free healthcare. The question remains the same… who is going to pay for all of this?

Maybe he wants a 70% tax rate like Alexandria Ocasio-Cortez. Maybe it’s 90% like back in the days of FDR.

But before he tries to squeeze more blood from the stone, Bill should look across the river to New Jersey.

Jersey has some of the highest income, property, and inheritance tax rates in the country. And its residents are already fleeing, including the billionaire hedge fund manager David Tepper, who moved himself and his business to Florida.

Just this one guy leaving means the state of New Jersey lost hundreds of millions of dollars in tax revenue – he almost singlehandedly threw the state into crisis.

And Tepper isn’t alone in fleeing to a friendlier tax state. Two million residents left New Jersey between 2005 and 2014. 60% of them went to Florida, taking with them their combined $18 billion of income.

New York is in the same boat. In the 12 months ending July 2017, the State of New York lost a net 190,508 residents (bringing the total loss to 1 million people since 2010 – the largest of any state). Guess where they’re headed… states with friendlier tax regimes.

So what exactly does de Blasio think this kind of rhetoric is going to do for NYC’s tax revenue?

He doesn’t care. Because this speech wasn’t really aimed at New Yorkers. It was aimed at the entire nation.

Bill de Blasio is one of the cadre of rising socialists who is considering throwing their hat in the ring for a 2020 Democratic nomination.

If Trump was the answer to politically correct, cry-baby social justice warriors, just imagine who will come to power when the pendulum swings back the other way. We saw a preview with Bernie Sanders in 2016… Elizabeth “you didn’t build that” Warren echoes his economic illiteracy.

Message received loud and clear Comrade Bill. Wealthy people are the enemy… and their money should be in the “right” hands (presumably the not-so-invisible hands of government).

This pretty much captures it all: they want your money. It’s not even your money. You earned it… but they have a right to take it.

This is an important, and growing, trend in the Land of the Free. And you need to pay attention.