Presenting the nominees for The Dumbest Government of 2014 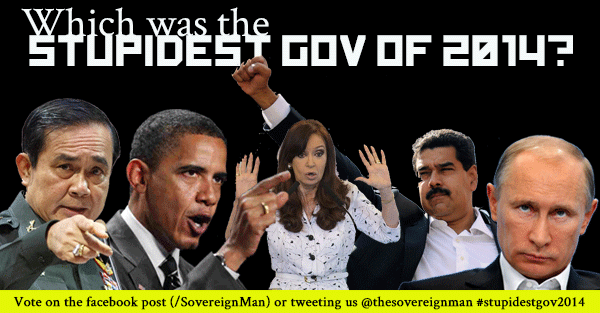 Each year governments around the world seem to compete with one another to come up with the dumbest and worst policies possible. But which one is the stupidest?

The competition is indeed tight as there are just so many terrible entries to consider. But my team and I took some time over the holidays to narrow it down.

We’ll leave it to you to help decide which one should be crowned Dumbest Government of 2014.

In order to cast your vote, leave a comment on our Facebook page, or on Twitter (@thesovereignman #stupidestgov2014), and we’ll release the results later this week.

It is difficult to quantify policy stupidity, as this is one area in which governments can be exceptionally creative. So we’ve decided to set some criteria to help make comparisons.

The two main measurements we look at are greatest damage done to personal freedom and economic activity.

We’re also looking at the biggest relative decline in the past year, not merely the worst government in absolute terms—otherwise North Korea would have topped the list for the past few decades.

This year we’ve seen a significant move in the digital world towards spying, censorship, and limitations of free speech amongst many of the top contestants.

Economies have been destroyed the world over by wars on other countries, wars on free markets, and wars on sound money—increasing volatility and frightening away brains, businesses, and capital.

With that in mind, the nominees are [drumroll]…

Undoubtedly the first country that comes to mind, with its decision to invade Ukraine.

In response, capital has fled and the ruble has plummeted. Over $55 billion in reserves have been used so far to prop up the currency.

The damage to the economy has been so great that Apple alone is now worth more than the entire Russian stock market. (Investors—pay attention to this).

The government has responded with even more stupidity, as it has attempted to crack down on dissent by requiring bloggers to register with the government and most recently banning the use of the word “crisis” in public.

This is a country that has gone from bad to worse with incredible speed this past year, and Russians have some very tough times ahead of them with the economy in severe recession.

Failing to foresee the consequences of one’s actions is a common flaw amongst politicians around the world, but with none is it as obvious as in the case of Venezuela’s president, Nicolás Maduro.

Completely ignoring the laws of supply and demand, he imposed strict price controls, which resulted in shortages across the board, including even basic necessities such as toilet paper, flour, cooking oil, and sugar.

In the time since, Venezuela’s government has gone to ludicrous lengths to respond to shortages. They’ve tried everything—except allowing prices to be set freely.

Mr. Maduro has deployed the military to patrol grocery stores, has required people to have numbers on their arms to track their purchases, and has even implemented fingerprinting systems to do the same.

You can tell how poorly mismanaged the country is given that Venezuela, which has some of the top oil reserves in the world, still has to import oil.

And when people poured out into the streets to protest, Maduro’s forces cracked down viciously.

This may have postponed the government’s collapse for now, but Mr. Maduro has ensured that when the day comes, la revolucion will not be peaceful.

With one of the highest inflation rates in the world right now, at roughly 40%, another economic disaster is the case of Argentina.

Despite officials’ attempts to misrepresent inflation statistics and targeting of economists who try to publish more accurate figures, no one is fooled.

Thanks to the country’s Supply Law introduced earlier this year, companies have been prohibited from setting their prices too high, generating too much profit, or producing too little.

Importers are required to export the same value they import, while currency controls have been enforced by currency-sniffing dogs to prevent capital flight.

Of course let’s not forget that Argentina defaulted on its debt yet again this past summer as well.

Anyone familiar with the Thai government’s scheme of subsidizing rice purchases from farmers could have told you it would fail. For in the space of a single year, the program cost $12.5 billion to wastefully stockpile 18 million tons of rice that is now rotting away in government warehouses.

Thailand’s position as the world’s leading rice exporter is not the only thing that toppled as a result of this obtuse policy. The country experienced yet another coup when the government was toppled by a military junta back in May.

Stability was regained momentarily, but the country has been on a continuous decline ever since, with increasingly harsh crackdowns on dissenters.

In recent months people have been sentenced to two years in prison for something as innocuous as raising the Hunger Games’ three-finger salute.

Last but not least there is of course the United States.

Once thought of as the Land of the Free, the country has now dropped to 12th place in last year’s Economic Freedom of the World Index, behind the United Arab Emirates and Jordan.

Government debt levels soared to unprecedented $18 trillion this November, and nothing is being done about it, with unfunded liabilities well over $200 trillion.

As a percentage of GDP, official debt now exceeds 100%. Of course, the only reason they’re able to run such a prodigious debt is because the rest of the world buys Treasuries and uses US dollars.

So you’d think that the US government would go out of its way to treat the rest of the world with respect and dignity in gratitude for continuing to buy US debt.

2014 showed the US government taking a giant, steaming dump on the generosity of foreigners, chasing away friend and foe alike.

They were caught spying on their own allies. They extorted foreign banks (a single fine against French bank BNP Paribas totaled $9 BILLION).

They used credit rating agencies as political pawns (downgrading Russia back in April).

They destroyed their own balance sheet and that of the Federal Reserve. (The US is totally insolvent, and on a mark to market basis, the Fed is nearly insolvent).

And they passed insane regulations, then arrogantly commanded the rest of the world to comply.

Most notably, key provisions from the Foreign Account Tax Compliance Act were implemented in 2014.

This law should have never been passed. And they had years to undo it.

It’s amazing how many politicians got worked up about repealing Obamacare, but not a single soul gave a damn about repealing FATCA, the law which will probably be directly responsible for the US losing its status as the world’s dominant banking center.

Oh yeah, that happened too. 2014 saw the rest of the world get fed up. Developing nations led by China banded together to create their own reserve bank to compete directly with the IMF.