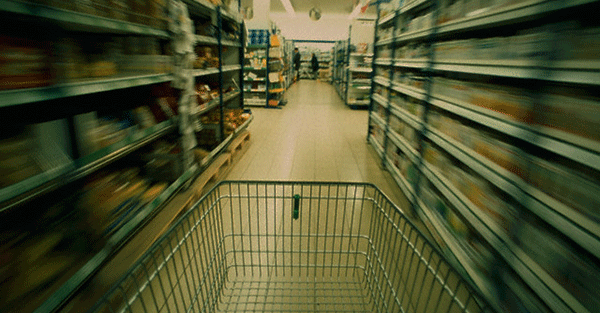 I want you to imagine this nightmare scenario for a moment.

You walk into the grocery store and head down the aisles, family in tow, procuring your normal ration of foodstuffs for the fortnight.

Aisle after aisle you wander, the same sneaking suspicion tugging away at your consciousness, until the horrific realization finally cold-cocks you: prices are CHEAPER than they were a month ago.

You stand aghast at this sinister new reality in which prices dropped a big fat whopping 0.4%.

You can barely bring yourself to contemplate how the economy could possibly withstand such a gruesome price swing.

But there’s no time to waste.

Trying not to panic, you grab your children and race home, speeding through every red light on the way, and then immediately hunker down to wait for the coming zombie apocalypse.

Deflation has arrived. And as terrifying as it sounds to have to suffer from prices that have fallen ever-so-slightly, that’s exactly what the unfortunate people of Sweden had to deal with earlier this year.

You can just imagine the chaos that ensued in this otherwise pristine, stable, freedom-loving country.

(After all, Sweden is so free that they launched a worldwide manhunt for Julian Assange because he -allegedly- had sex with a Swedish girl and may or may not have worn a condom.)

If you’re still reading this far and haven’t fainted yet from the sheer terror of deflation, not to worry. Paul Krugman came to the rescue to save the people of Sweden from falling prices and effectively declared WAR on Deflation.

In a bold act of brazen courage not seen since the Normandy Invasion, General Krugman risked serious wrist injury several months ago when he wrote a strongly worded letter, chastising the Swedish central bank for not cutting interest rates fast enough.

General Krugman barely escaped with his life, but the people of Sweden were saved.

The War on Deflation, however, is far from over. While Sweden’s dizzying price collapse of 0.4% has now halved to 0.2% deflation, General Krugman cannot rest until ALL prices EVERYWHERE are once again rising.

Luckily the people of Switzerland have a more proactive central bank than they have in Sweden.

As such, the Swiss National Bank has just announced that, rather than wait for deflation to hit, it will join the European Central Bank (ECB) and take its own interest rates into negative territory.

In other words, rather than wait for the evil deflationary terrorists to strike, they will bring the fight to the terrorists and preemptively strike with negative interest rates to destroy these evil terrorists who hate them for their economic freedom.

If you are a very lucky German, for example, you may now be finding yourself PAYING your local bank for the privilege of letting them make loans at your expense.

And lucky institutional investors across the world are finding themselves fortunate enough to be paying NEGATIVE yields to loan money to bankrupt European governments.

Look at the bright side: it’s quite an honor to be able to fight for your country (or whatever quasi-federalized supra-national entity the EU is supposed to be). You too can do your part in the War on Deflation.

Yes, it might cost you your entire life’s savings and your family’s future livelihood.

Yes, it’s completely counterintuitive that falling prices are somehow bad for consumers who have been responsible enough to save.

Yes, we see that the European Central Bank has been (by its own admission) trying to stoke deflation by encouraging the Spanish government to “take exceptional action” to limit the growth of wages.

Yes, we know that the long-term costs of fighting the War on Deflation probably aren’t worth the benefits, and that the tactics like negative interest rates have changed the world for the worse.

None of that matters.

As good citizens we should all have blind faith and allegiance to General Krugman and his intrepid central bank lieutenants around the world.

Together, we can win this war against the enemy that they tell us to fear.