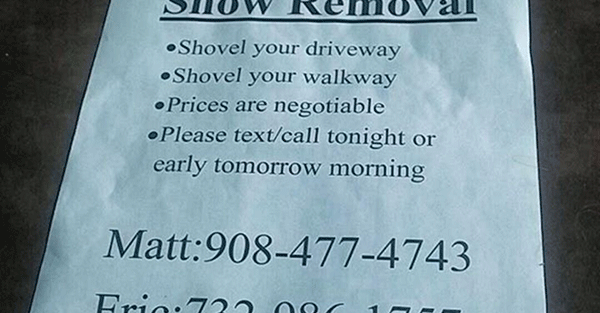 When I was a teenager, it was pretty common for young people in my lower-middle class neighborhood to find work.

I was a waiter myself… though probably one of the worst in history, as I may still hold the record at Tippin’s Restaurant and Pie Pantry for the most cups of coffee spilled on patrons.

A lot of other kids would do odd jobs like cutting the grass and whatnot. And some of them were pretty successful at it.

I remember two kids in my class, Ryan and Will, had a very successful lawn mowing partnership.

One of the reasons they did so well was because they realized how much more efficient and profitable they could be if they could maximize the number of clients within a single neighborhood.

Instead of wasting time driving around from neighborhood to neighborhood, they could focus on servicing as many yards as possible within a few blocks.

This was an extremely important lesson for them… and one they would never learn in school.

It’s obvious that doing things like this provides incredible and in many cases life-changing lessons for kids.

It’s the whole idea of having the freedom to start something from scratch out of your own sweat and labor, to provide a valuable service and to work hard, and stake your reputation on the quality of what you do.

This concept is at the very foundation of the American Dream. Or at least it used to be.

Case in point, last week, two teenagers in New Jersey were going around their neighborhood advertising their snow-shoveling service right before the big storm hit.

Seems pretty enterprising. But in the New America where security trumps all else, a local resident called the police to report about the teens’ “suspicious activity”.

It’s the starkest example of how “if you see something say something” is one of the most enslaving, destructive mantras in history.

Police actually came out to investigate since, apparently running a snow-shoveling business is something that only criminal terrorists would do.

Even when the police saw that it was just two harmless kids trying to earn some money, they didn’t let them go on about their business.

Instead they forced them to stop. Because in the Land of the Free, it seems you need a permit in order to offer to shovel snow for people.

And so these two entrepreneurial teenagers were sent home by the police for their lack of permitting after being suspected of suspicious activity by a local resident.

Just think about the lesson that’s being reinforced here: if you get off your ass, go out there, and try to take charge of your financial future, you’ll end up with nothing but a bunch of headaches, accusations, and unpleasant encounters with the government.

These kids just learned that in the Land of the Free, they’re better off staying home.

It’s a terrible thing to teach people, especially kids in their formative years, and it happens all the time; we constantly hear these stories now about little girls getting run off from their lemonade stands, etc.

Entrepreneurship and enterprise are good for everyone, creating successful businesses, jobs, wealth, and valuable products and services for an entire society.

You’d think that a government drowning in debt would bend over backwards to encourage people to get out there and hustle.

Instead they’ve done just the opposite.

Whether intentional or not, they’re waging a de-facto war on one of the last remaining cultural values that made America what it once was.