“Tesla, without any doubt, is on the verge of bankruptcy.” 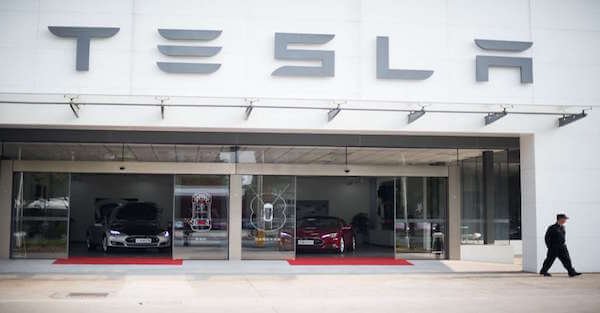 Just a few days ago, shareholders of Tesla approved an almost comical pay package for their CEO Elon Musk that could potentially put $50 BILLION in his pocket over the next decade.

Let’s put this figure in perspective: at $5 billion per year, Musk would make more than every single CEO in the S&P 500. COMBINED.

In other words, if you add up the salaries of all the CEOs of the 500 largest companies in America, it would still be less than the $5 billion per year that Mr. Musk stands to earn.

That’s pretty astounding given that Tesla’s own 2017 4th quarter financial report (page 24) states that Elon “does not devote his full time and attention to Tesla”.

Or more importantly, that under Musk’s leadership, Tesla’s chronic financial incontinence has racked up more than $4.97 billion in operating losses for its shareholders.

Or that the company has been under SEC investigation (without bothering to disclose this fact to shareholders).

Yet they saw fit to reward him with the largest CEO pay package in the history of the world.

This is precisely the type of behavior that is only seen during periods of extreme irrationality when financial markets are at their peak… and poised for a serious correction.

Thompson is one of the few hedge fund managers who has consistently outperformed the market, and his fund is betting big against Tesla. What follows are some passages about Tesla from Thompson’s recent investor updates:

Tesla, without any doubt, is on the verge of bankruptcy.

The company cannot survive the next twelve months without access to capital from Wall Street Banks or private investors.

We estimate that Tesla will need roughly $8 billion in the next 18 months to fund operating losses, capital expenditures, debts coming due, and working capital needs.

However, it appears that due to past SEC investigations and current investigations (which terrifyingly have not been disclosed by the company), it will likely be difficult for Tesla to access public markets.

According to a recent analyst report, there have been 85 SEC requests for additional information and disclosures in the last 5 years.

This compares to Ford Motor Company’s total of zero over the same time frame. This means that Tesla is pushing many, many boundaries.

When a company is under formal investigation, it is difficult, if not impossible, to raise capital from public markets as these investigations must be made public, which generally craters the equity and debt values.

Therefore, Tesla investors better hope there are a number of Greater Fools in China or elsewhere to keep the company solvent.

At some point, the music stops and there aren’t any open chairs.

No matter how good a social investment makes you feel as it is going up, extreme anger will result if most or all of your money is permanently lost, especially when it is due to false and misleading statements by senior company officers.

This is when the [Department of Justice] steps in and escorts untruthful managements to their new living quarters.

Further, Ford has $12 billion in cash held for “a rainy day” while Tesla will likely run out of money in the next 3 months.

. . . I have never seen anything so absurd in my career.