050: The accounting scam that is hiding billions of losses in the US banking system 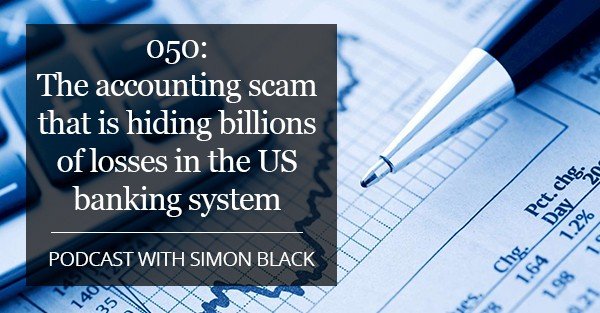 There’s not a doubt in my mind that one of the greatest scams in the world is modern banking.

When you think about it, every element of the system is stacked against us.

By making a deposit we are loaning our hard-earned savings to a bank, for which they pay us a whopping 0.1% interest.

In some parts of the world now they even charge us interest for the privilege of loaning them our money.

Banks then take our hard-earned savings and gamble it all away in the latest investment fad, no matter how stupid and destructive it might be.

When they screw up, they’re deemed ‘too big to fail’, and the government steps in to indebt future generations who won’t even be born for decades in order to bail out the banks’ stupidity.

Banks are also unpaid government spies and are required by law to rat us out to federal agents should they decide in their sole discretion that what we are doing with our own money is “suspicious”.

Banks have no loyalty to the customer. They serve their government masters first and foremost.

Should some government bureaucrat so much as make a phone call, they will freeze you out of your life’s savings in a heartbeat.

And hardly a month goes by where a bank isn’t indicted on some criminal charge to defraud their customers.

And for their misdeeds they get a few slaps on the wrist and a fine that fills the government’s coffers.

Too big to fail, too big to jail. It would almost be funny if it weren’t so obscene.

Yet despite every shred of evidence that this system is at odds with customers’ best interests, very few people ever question the sanctity of their banks’ credibility and financial condition.

It’s just assumed that banks are stable, sound, and conservative.

Nothing could be further from the truth.

In today’s podcast I highlight an extremely clever accounting trick that banks have been using for the last few years to hide the true nature of their finances.

Here’s the short version: Banks have the ability to choose how they treat their bonds for accounting purposes.

If they classify their bonds as “available for sale”, or AFS, the bank is forced to disclose any losses under ‘comprehensive income’, which negatively affects their capital levels.

But banks don’t want to do that. They’re gearing up to take a HUGE bath as the values of their bond portfolios collapse.

And rather than show the world how pitifully capitalized they really are, banks have opted to reclassify huge sections of their bond portfolios into a different category called “hold to maturity”, or HTM.

HTM assets don’t require banks to write off any losses against their capital reserves.

So the banks just get to keep pretending that they’re safe.

So far US banks have rotated hundreds of billions of dollars worth of bonds from AFS into HTM. And they’re just getting started.

It’s an unbelievable scam. And everyone’s in on it. All the big banks. The regulators. The government. The Fed.

You’ll be amazed to see the data I present in today’s podcast; one of the largest banks in the US, for example, went from having 0.0% of its assets as HTM, to having nearly 50%.

Poof. And just like that, the bank’s financial condition is tip-top.

I can’t stress this enough, you really need to see dangerous scam with your own eyes. Find out the truth here: