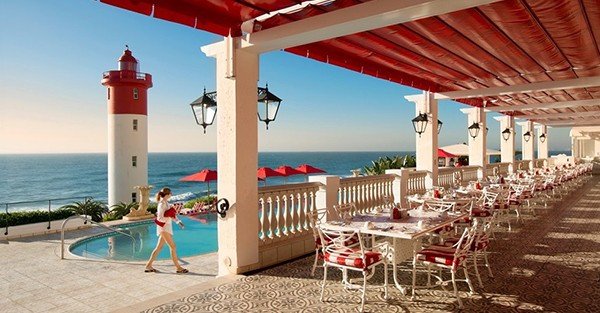 When I did the math in my head last week, I had to pull out my phone’s calculator just to make sure I hadn’t mentally misplaced the decimal point.

It turns out I was right. My rental car in Cape Town would cost me just $8/day. And that included all the silly taxes and fees and nonsense.

Eight bucks. I imagine that the car depreciates more than that.

The rest of my time here has been filled with similar awe.

Dinner for two at a high-class restaurant along the oceanfront promenade in one of Cape Town’s most luxurious neighborhoods set me back about $30.

Nearly everywhere I see here is shockingly cheap… when I convert to dollars.

Grocery stores sell giant bags of food—fresh plums and peaches, for less than a dollar per kilo, or about 40 cents per pound.

And of course, one of the reasons I came here to begin with is because Round-the-World flights starting in South Africa are dirt-cheap.

My itinerary has me traveling from here to Australia, Asia, South America, the US, Europe, and back to South Africa, all for about $5,500. In business class.

A deal like that is absolutely unheard of. And it all comes down to the local currency, the South African rand.

It wasn’t that long ago that the rand was valued at about 8 per dollar. I remember coming here not too long ago when the rand was 6.

Today it takes more than 15 rand to buy a single US dollar– record low territory for the South African currency.

And just last week, the rand lost more than 10% against the dollar.

In currency markets where price swings of 1% to 2% are considered chaotic, a 10% drop in a currency’s value is practically apocalyptic.

This makes South Africa one of the cheapest countries in the world right now, if you’re spending in US dollars.

What’s crazy is that South Africa is not alone. Currencies around the world are trading near record lows.

This strikes me as truly bizarre. It’s not like the economic fundamentals of the United States, and the fundamentals backing the US dollar, are particularly strong.

The US dollar is issued by the Federal Reserve, a central bank that is nearly insolvent according to its own balance sheet.

And of course, the US economy is so ‘strong’ that the Fed has been agonizing for a year whether America is ‘ready’ for a 0.25% interest rate increase this week.

Moreover, the US government is in debt up to its eyeballs and also insolvent according to its own financial statements.

It’s pure madness to think that this is the ‘strong’ economy.

Or that a round-the-world ticket costs $14,000 in the US, but the exact same itinerary ticketed from South Africa costs only $5,500.

The US dollar is clearly in a massive bubble, while the rand is extremely undervalued.

And while it could take time, modern financial history shows this imbalance does tend to correct itself.

This does present a compelling opportunity right now to buy high quality assets overseas for next to nothing.

Or at a minimum, to enjoy an incredible lifestyle for a fraction of the cost, or to explore the world on a shoestring.

We have that ability today.

This valley where I spent the weekend about an hour from Cape Town was the destination of choice for French Huguenots who fled religious persecution.

When they came from France in the 1600s, they had to brave a treacherous journey across the world, risking disease, starvation, and pirates.

And that was just to get here.

Once they arrived they had nothing. Yet they built a brand new civilization from scratch, bringing with them all the best elements of their culture.

Just like in North American and Australia, early settlers realized that life wasn’t going to improve back home. And if they wanted access to better opportunities, they had to take big risks and look abroad.

Today we have it so much easier.

We can hop on an airplane and wake up on the other side of the world tomorrow morning.

We can access incredible financial opportunities and profit from the next great financial bubble, all without leaving our living rooms.

Despite all the idiots out there trying to start World War III, the world really is full of opportunity.

Whether you’re seeking a better, higher quality lifestyle at a fraction of the cost, or financial opportunities to make more money, it’s all out there.

And with much greater ease than our ancestors dreamed of. All it takes is the willingness to learn… and to take action.