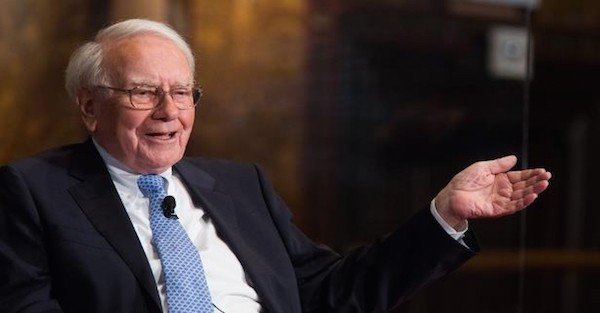 It’s typically pretty hard to find anything exciting to say about drywall.

Yes, drywall… as in, the building material that’s used for interior construction.

Drywall, also known as wallboard, is manufactured from rehydrated gypsum to produce a calcium sulfate plaster, that’s later mixed with mildew-resistant foaming agent. . . hello? Are you still there?

Seriously, though, in this particular case, drywall is a big deal.

The largest distributor of wallboard in the United States is a company called USG.

USG is quite large– the company has been around for more than a century and generates billions of dollars in revenue.

(Its shares trade on the New York Stock Exchange under the ticker symbol USG.)

And it just so happens that none other than Warren Buffett’s Berkshire Hathaway is the largest shareholder in USG.

Buffett scooped up a 31% stake in the company during the financial crisis 10 years ago in a sweetheart deal that valued USG at less than $1 billion.

Presuming the deal closes, Buffett’s investment in USG will net around $2 billion, nearly 7x his original investment ten years ago. Not a bad return.

But here’s the interesting thing.

Warren Buffett is notorious for almost NEVER selling. His famous quip, “Our favorite holding period is forever,” means that he likes to find wonderful businesses that are selling at a discount, buy as much of them as possible, and enjoy the returns of that investment indefinitely.

In other words, if you’ve acquired a fantastic, well-performing asset at a cheap price, why sell?

And he practices what he preaches. Buffett rarely sells anything.

It was a big deal, for example, when he announced earlier this year that he had sold off all of his IBM shares. It was a very rare move for Buffett.

But with USG, Buffett was happy to sell; Knauf’s bid was a whopping 31% higher than where USG’s stock was trading prior to the announcement.

That’s a pretty insane price… so insane, in fact, that the man who typically holds his investments forever– is happy to sell.

It’s even more peculiar given how well USG has been performing.

Revenue and operating cash flow have been growing steadily. And the US housing market (which drives USG’s fortunes) has also been strong.

Maybe Buffett just didn’t like the company, or management. Who knows. And by itself, the USG sale might not be a big deal.

But let’s go back to what we discussed a few months ago.

As I wrote in February, Buffett’s company reported a record cash balance in its annual report– a massive stockpile of $116 BILLION in cash at the end of 2017… most of it in short-term Treasury Bills.

Moreover, Buffett reported that he hardly bought anything in 2017 either:

“In our search for new stand-alone businesses, the key qualities we seek are durable competitive strengths; able and high-grade management; good returns on the net tangible assets required to operate the business; opportunities for internal growth at attractive returns; and, finally, a sensible purchase price.

That last requirement proved a barrier to virtually all deals we reviewed in 2017, as prices for decent, but far from spectacular, businesses hit an all-time high.”

Buffett’s $116 billion mountain of cash was enough to literally buy any of the 450 largest companies in the United States.

But he didn’t buy a single one. Why? Because they’re all too expensive. Asset prices are far too high.

So… here is the most successful investor in modern history who:

2) Is stockpiling a mountain of cash;
3) Is now selling an asset that he would typically hold forever because another company made an absurdly high offer for the business

It’s true that no one rings a bell at the top (or bottom) of any market.

But it seems pretty clear from Buffett’s actions that it might be a good time to take some money off the table and wait patiently for the compelling opportunities yet to come.