Not quite ready for investment… but still Disneyland for nature lovers 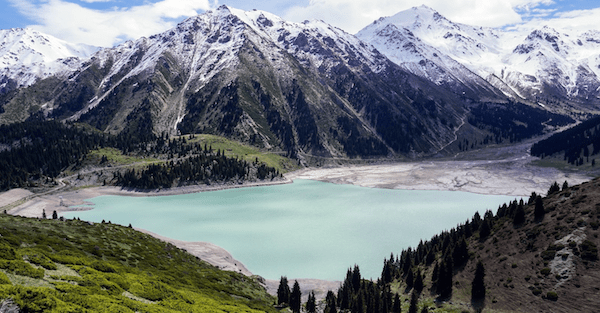 In the spring of 1937, a young Scottish diplomat named Fitzroy Maclean embarked on a two year journey across the Soviet Union.

It was something that no Westerner had done in more than two decades, and this was well before any modern conveniences, so Maclean had to travel by any means necessary– including donkey cart.

Years later he published a wonderful book about his experience called Eastern Approaches.

To give you a flavor of Maclean’s style, there’s a great passage where he describes a night spent in a dingy basement at an inn–

… just above my bed, a team of six solidly built Armenians were executing, with immense gusto, a Cossack dance, kicking out their legs to the front and sides and springing in the air, to the accompaniment of a full-sized band and of frenzied shouting and hand-clapping from all present. There was no hope of sleep. I ordered a bottle of vodka and decided to make a night of it.

Eventually Maclean made his way to Almaty, the capital city of Kazakhstan back then. He wrote very fondly:

Alma Ata must be one of the pleasantest provincial towns in the Soviet Union. . . In Kazakh its new name means ‘Father of Apples’, an appellation which it fully merits, for the apples grown there are the finest in size and flavour that I have ever eaten. The central part of the town consists of wide avenues of poplars at right angles to one another.

Little has changed. Almaty is still a provincial town– quiet, picturesque with tree-lined streets and bazaars.

And though the political capital of Kazakhstan was relocated in the 1990s to Astana (which was renamed Nursultan earlier this year), Almaty is still the country’s business and economic hub.

There’s a fair amount of wealth in this city; Kazakstan’s economy is powered by energy and mineral exports. It’s the #1 producer of uranium in the world, with roughly 40% of global supply. It’s also a top producer of coal, oil, gas, and other minerals.

And that export wealth has managed to trickle down and create a robust middle class.

There are upscale neighborhoods with nice houses and apartments, and plenty of luxury cars on the streets.

But it’s still quite inexpensive here. Food and rent cost nothing by Western standards, and gasoline is only 40 cents per liter (about $1.50 per gallon).

Now, I’ve written a lot over the past decade about different places in the world with compelling business and investment opportunities; but to be candid, Kazakhstan isn’t suitable for most people.

Despite its economic success and robust growth, this country is still highly bureaucratic. I’d only consider a very large-scale energy or agricultural project here.

Investing is also a challenge, especially if you don’t have a local broker.

There are only a few companies whose shares trade on foreign exchanges; for example, the largest bank in Kazakstan (Halyk Bank) trades on the London Stock Exchange.

But the share price has been bid up by every investor who wants exposure to Kazakhstan, so it’s not a particularly attractive valuation relative to the risks.

I expect investment opportunities to improve over time– Kazakstan’s stock exchange is already working on becoming more accessible to foreigners. But this will take time.

For now, I think digital nomads and location-independent professionals will find this place compelling– people who enjoy traveling and can work from anywhere as long as they have an Internet connection.

Kazakhstan ticks the boxes. It has sufficient Internet speed (with some minor censorship that’s easy to bypass with VPNs).

The government recently relaxed its visa regime, opening up the country for visa-free travel from dozens of countries. So there’s no hassle getting in.

There are definitely better places to go in the world that have more culture, richer cuisine, faster Internet, and better transportation options.

But what really sets Kazakhstan apart is its nature. This place is Disneyland for nature lovers.

Drive twenty minutes in the other direction and you’re in the legendary steppe grasslands of central Eurasia– vast open plains that extend all the way to Mongolia.

I spent some time here over the weekend en route to Uzbekistan for our Total Access trip. And it was majestic.

I drove less than an hour from Almaty on a modern highway that’s better than any US Interstate or European toll road I had ever experienced. And then veered off into the wilderness where there were no roads at all.

It was incredibly peaceful; I didn’t see a soul for hours, except for a single cowboy on horseback driving his herd of goats across the steppe.

(He waved a friendly hello as he passed by, and I gave him a clumsy thumbs-up in return, hoping afterwards that the gesture wasn’t regarded as an insult in this country.)

This type of experience is a rare mix: the nature is mesmerizing. It’s authentic. Nearby a modern city. Yet still relatively unknown worldwide.

It would be like having Yellowstone National Park just minutes away… and all to yourself… without a single placard telling you what you can or cannot do. That’s Kazakhstan.

It will be a few years before the business and investment opportunities in this country are more palatable and accessible.

But for now I would still put Kazakstan on your radar as a unique experience worth checking out.