The US is losing 9.5 acres of farmland per minute 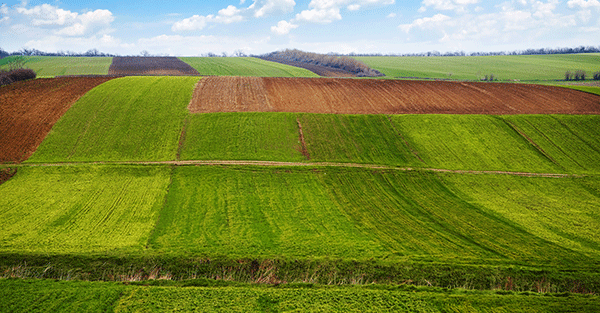 More than six thousand years ago, the most advanced civilization on planet was Sumer, rulers of the fertile plains of ancient Mesopotamia in modern day Iraq.

The Sumerians weren’t powerful from their military strength or political system; rather, it was agriculture that developed their civilization.

Quite simply, the ancient Sumerians had developed techniques to produce far more agriculture than they could possibly consume.

This food surplus meant that they could build up a large pool of savings to be used in trade, or to feed workers who could pursue other careers like science and architecture.

Nearly every great civilization ever since has shared the same characteristics– being able to produce more than it consumes.

In fact, no society can survive without the ability to feed itself. We’ve seen this throughout history.

When the Sumerians’ complex , centrally-planned network of canals failed to adequately irrigate their farmland, the civilization quickly declined.

The Roman Empire was notorious for routinely invading other lands looking to secure additional sources of food.

During the American Civil War, a large part of the Union’s strategy was to cut off the South from its food sources, and burn to the ground every acre of farmland they could find.

And despite decades of economic hardship, the French Revolution finally kicked off in 1789 because the nation could no longer feed itself… and people were starving.

Early on in US history, the country’s strength came from this same ability to produce more than it consumed.

And over the centuries the US became farmer to the world, exporting interminable quantities of food like a never-ending breadbasket.

But that trend peaked long ago.

Over the past five years, for example, the amount of farmland in the US has decreased by 5 million acres each year, often due to land development or aging farmers quitting the business.

This is equivalent to losing nearly one square mile of farmland every hour, or 9.5 acres per minute.

The same trend is taking place in China, where more than 40% of the country’s arable land has been lost in recent years due to development, drought, and topsoil erosion.

Yet while we’re seeing a dramatic decline in the amount of farmland available per person in the world’s largest powers, demand is rapidly increasing.

I’m not just talking about population growth, which is a given. There’s also the growth in demand that comes with economic development.

As a nation’s wealth increases, so does its demand for food.

The billion people across Asia being lifted out of poverty into the middle class are consuming more Calories than ever before, and consuming meat for the first time ever.

So not only are people consuming more Calories, but they’re also requiring more land per Calorie.

This is a clearly unsustainable trend: the world needs more farmland per capita to meet food production needs at a time when the amount of farmland is in decline.

On top of all this are the water challenges that many parts of the world are experiencing. California is a great example.

What’s less known is that, along with many other crops, California is the world’s top almond producer.

The state produces 80% of the global almond supply, completely dwarfing production in the rest of the world combined.

Yet at the same time, California almond growers consume nearly 10% of the state’s water supply.

Think about it– when you export agriculture, you are also exporting all the resources and inputs that go into producing that agriculture.

So at a time when the entire state is suffering from extreme drought, California almond farmers are essentially exporting 10% of the state’s dwindling water supply.

This math doesn’t add up. And it doesn’t take a rocket scientist to figure out that, at a minimum, the price of almonds is due to rise dramatically in the coming years.

Almonds are just one example. We can see this across the board with food in general.

For most crops, yields peaked long ago; in other words, human beings are already extracting the maximum amount of tons, kilos, bushels, etc. per acre.

And thanks to absurd government and monetary policy, we’re simultaneously seeing rising production costs, as well as idiotic incentives to turn food into inefficient fuel. Or subsidies which pay farmers to not grow at all.

These trends are all converging at the same time, suggesting a long-term rise in food prices, and in some cases even shortages.

And it’s a trend that will affect nearly everyone on the planet.

On a small scale, you can do well for yourself by planting a small garden with some fruit and nut trees in your own backyard. Worst case you enhance your property value and have a small supply of organic food.

On a larger scale, owning productive farmland and selling food across the value chain may turn out to be one of the best investments of the decade.

But with farmland prices at all-time highs in the US, and water availability highly questionable, the real opportunities lie overseas. More on that tomorrow.