The worst investment of the century—paying 0.07% interest 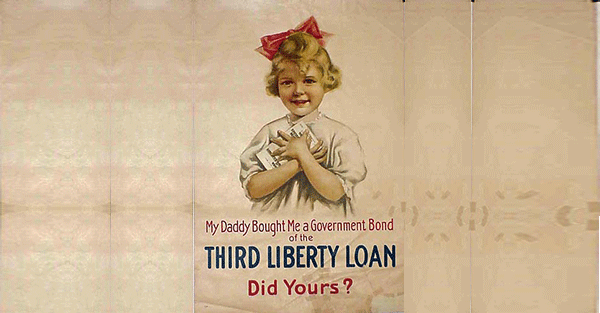 Edith had been saving up wherever she could. She only prepared meat once a week for the family and she’d spent many extra hours mending the children’s clothing so they wouldn’t have to buy any new things this year.

So when she and her husband had finally saved up enough to purchase a £100 war bond, she was filled with immense pride.

Everywhere around her the posters had advertised, “unlike the soldier, the investor runs no risk”.

Not only was she proud to know that she was doing her part to help Great Britain win the Great War, but also that she was making a safe investment in her children’s future.

Little did she know that she was actually investing in her children’s future financial enslavement.

Initially Edith was promised that the bond would be paid out after 20 years, and in the meantime she would earn 5% interest each year.

Just 10 years in, the British government said that times were tight and refinanced the loans, bringing down interest payments to 4%.

Another 5 years later, they pushed their rates down yet again to 3.5%. And this time they took off the 20-year deadline, offering that instead of paying back the principal that they would just keep paying out interest indefinitely.

Nearly 100 years later, over £2 billion of WWI debt remains, with the British government continuing to pay out 3.5% annually.

And that’s where you see the essence of the scam.

Now, Chancellor George Osborne has proclaimed that the UK will pay off all of the country’s WWI debt.

But what that really means, is that the British government will take advantage of the ludicrously low interest rates available today to refinance yet again. (Remember, they’re the ones who set those interest rates).

Repaying the debt at 2% of the value you originally issued it for? This is how a stealth default looks like. And it’s happening today as well.

Governments all over are implementing every possible trick to avoid paying their debts in anything of real value. All at the expense of both its creditors and the general population.

The UK is of course not alone in peddling this scam. In fact there is only one country that has paid off all of its debt from WWI, and that is Finland.

So nearly 100 years later, the decisions of a few politicians continue to haunt everybody today.

Prior to the war the United States had virtually no debt. After it, however, it had accumulated debt up to 33% of GDP. And they’ve not looked back since.

Despite what anyone says, war is never an investment. It is pure loss—human, civilizational, and financial.

No amount of reparations can make up for the millions of casualties and destruction of cities and economies.

It’s important to remember that on the 100th anniversary when Scottish, French, and German soldiers on the western front came together to celebrate Christmas in peace, if only for a while.

If, like Edith, you want to set yourself and your grandchildren up with a brighter future, the first step is to refuse to participate in this corrupt system.

Move at least a portion of your savings out of fiat currency and fraudulent government bonds (especially given that the dollar is far less capitalized than even the ruble).

Doing that you’ll not only prevent your savings being manipulated, you’ll also withdraw your support for wasteful government programs, corruption, and war.