These billionaires are issuing terrifying warnings about global debt levels 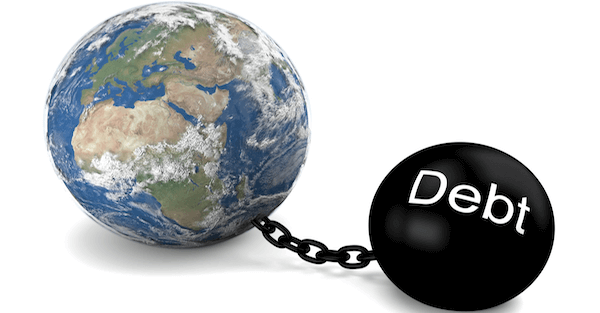 We write a lot about global debt levels at Sovereign Research.

In fact, the very first Notes from the Field I ever wrote, in June 2009, was about how broke the US was… and the severe consequences that eventually face a nation that recklessly spends money it doesn’t have.

And debt has been a major theme in this publication ever since.

As you know, since the Great Financial Crisis in 2008, debt levels have only gotten worse. But not just for governments.

Sovereign debt, corporate debt and consumer debt are all at all-time highs.

Last week, one of the most respected hedge fund managers in the world came out with a warning scarier than anything we could have dreamed of.

Seth Klarman runs the $28 billion hedge fund, Baupost Group. The guy is famously secretive (and conservative). So the fact that he went out of his way to make this public statement means you should pay attention.

Also, Klarman’s fund is closed (he’s actually been returning money), so he’s not doing this to scare people into investing in his fund.

In a 22-page letter to his investors, Klarman warned that government debt levels, particularly in the US (where debt exceeds GDP), could lead to the next global financial crisis.

“The seeds of the next major financial crisis (or the one after that) may well be found in today’s sovereign debt levels,” he wrote.

In addition to debt levels, Klarman is worried about the increasing social unrest (something we’ve written about in detail) and the public’s inability to decipher who is telling the truth these days between politicians and the media… both of which make it difficult for a capitalist system to thrive.

Who knows what will ultimately bring the system crashing down, but let’s focus on the US government’s exploding deficits…

In 2018, the federal government’s deficit hit $1 trillion. But these are “good times,” with soaring asset prices, solid corporate profits and record-low unemployment.

What happens when a recession inevitably occurs. Our friend Jim Grant of Grant’s Interest Rate Observer, says the deficit will blow out to $2 trillion.

So, $22 trillion in the whole and a $1 trillion deficit in a good year. Not to mention, interest rates are rising, which means all of this debt is just getting more expensive.

Eventually, people will simply refuse to lend Uncle Sam any more money… because they know there’s no way they’ll be repaid.

And we’re already seeing signs of that.

According to the Wall Street Journal, in the first eight months of 2018, overseas buyers of US Treasurys only bought half the amount they did over the same period in 2017.

“There is no way to know how much debt is too much, but America will inevitably reach an inflection point whereupon a suddenly more skeptical debt market will refuse to continue to lend to us at rates we can afford…”

And when fewer people want your bonds, that means it’s more expensive to borrow. But the government can’t afford to pay any more…

The government already spends 28% of its revenue just on interest (at a time when interest rates are near all-time lows).

Ultimately, Klarman believes the debt (along with the massive wealth disparity caused by a 10-year asset price boom) will lead to social unrest…

“It is not hard to imagine worsening social unrest among a generation that is falling behind economically and feels betrayed by a massive national debt that was incurred without any obvious benefit to them.”

Another line from Klarman that comes straight from Notes… “By the time such a crisis hits, it will likely be too late to get our house in order.”

At the recent Davos gathering, Ray Dalio, founder of the world’s largest hedge fund, said he thinks the next downturn will be worse than the Great Depression.

And like Klarman, Dalio says the problem comes down to too much debt…

“The biggest issue is that there is only so much one can squeeze out of a debt cycle and most countries are approaching those limits”.

The world is drowning in debt. And there’s no austerity measures in sight. In fact, a rising tide of socialist politicians want to explode government spending (paying for free healthcare, education and everything else under the sun).

We don’t know when this monetary experiment will end. The European Central Bank and Bank of Japan both essentially reneged on their plans to start tightening monetary policy. And yesterday, the Federal Reserve has signaled it will stop hiking rates.

Global central banks, it seems, have already given up on their weak attempts to tighten… fearing the economy wouldn’t hold up.

If they step back on the gas of QE, I believe that’s the point when people lose faith in fiat… and the US dollar specifically.

And while this all goes down, the central banks (who control the printing press) have been buying gold at the fastest pace in years. You may want to consider doing the same.

Gold is one of the few asset classes that hasn’t risen to absurd heights. But it may be coming back to life… the metal rallied to an eight-month high this week.