These guys used to issue the world’s reserve currency too 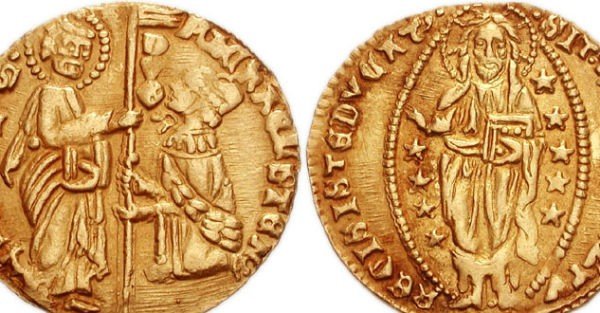 For hundreds of years the Byzantine Empire coined the most popular reserve currency in the history of the world.

Merchants all over Europe, the Mediterranean, the Middle East, and further, used it in trade for centuries.

It was called the solidus, and was introduced by Constantine I in 312 AD.

The solidus held steady at 4.5 grams of 24-carat gold for nearly seven centuries. Hence its Latin name – ‘solid’. The durability of its purity is nearly unprecedented in the history of money.

Its weight, dimensions and purity remained constant until the 10th century when the government began to debase it.

The debasement was gradual at first, then accelerated rapidly.

In a matter of decades its gold content was reduced to almost zero as the Byzantine Empire was scrambling for cash to finance its numerous wars.

Consequently, Emperor Alexios I Komenos drastically overhauled the Byzantine coinage system in 1092 and introduced a new gold coin, the hyperpyron.

It too was soon subject to gradual debasement. And by the mid 1200s the hyperpyron’s gold content fell drastically again.

The rest of Europe had seen this movie before. And when they saw the gold content in the hyperpyron fall, they quickly lost confidence.

By that time, the Byzantine Empire was weak—a shadow of its former power.

The Florentines and the Genoese took up the task and minted a new gold coin called the florin, which at 3.5 grams of pure gold was the most wildly circulated trade currency in Europe and around the Mediterranean for a while.

The Venetian ducat gained wide international acceptance in the 1400s. The ducat contained 99.47% of fine gold—the highest metallurgical purity possible at the time.

As the Venetian merchants traveled far and wide the ducat became an internationally accepted trade currency throughout the world.

Even though he didn’t live in Venice, for example, Leonardo da Vinci was paid by the King of France in Venetian ducats—exactly 400 ducats per year, which in today’s dollars equals to roughly $56,000 (and he didn’t pay any tax…)

The ducat was ultimately supplanted by the Spanish dollar (real de a ocho, or Pieces of Eight) with the onset of the Age of Exploration.

Pieces of Eight became so widespread in international trade that they were legal tender in the United States until the mid 19th century.

The clear lesson here is that this stuff changes.

It’s common for the world’s most powerful country to issue a currency that becomes adopted around the world as the standard for international trade.

But whenever that country reaches a point of epic, terminal decline, and especially when it rapidly debases its currency, the rest of the world seeks an alternative.

The US has been enjoying this special privilege for decades now.

The US dollar is the most widely used currency in the world for international trade. Central banks and sovereign governments around the world hold trillions of US dollars.

And while these changes never happen overnight, it’s clear that the dollar is quickly losing this status.

The French Finance Minister recently called for a ‘rebalancing’ of currencies in global trade settlement. The British, French, Canadians, and Swiss are all on board with this trend.

As are, clearly, the governments of Russia, China, and India. Nearly the entire world understands this trend. Everyone but the United States government.

They’ll be the last ones left in the room after nearly everyone else has headed for the exit, oblivious to their own destruction.

People who understand this shift and get out in front of it will make fortunes.

Those who play Ostrich, stick their heads in the sand, and keep all of their eggs in one frail basket are taking the gamble of their lifetimes.