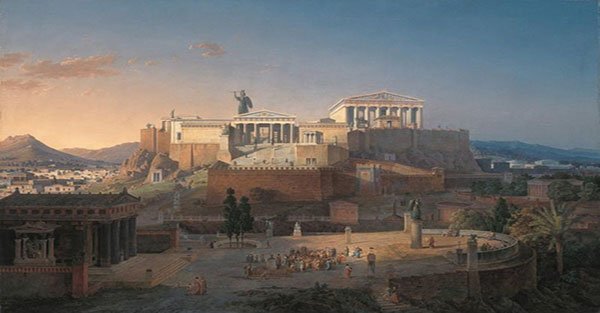 In the year 440 BC, more than two decades into the reign of Pericles, an audit of treasury in Athens showed a massive surplus of more than 9700 “talents”.

A talent was a common unit of measurement in the ancient world, especially for gold and silver.

And, based on today’s precious metals prices and the traditional gold/silver ratio (14:1) used by the ancient Greeks, 9700 talents is equivalent to about $700 million today.

At the time, Athens boasted a population of around 43,000 citizens and 28,500 foreign residents… so on a “per capita” basis, the ancient Athenian surplus amounted to just under $10,000 per person in today’s money.

If you compare this figure to our modern world, it’s pretty extraordinary.

Modern China, despite all of its incredible wealth and savings, has a total surplus that amounts to less than $1,200 per person.

The United States doesn’t even have a surplus.

So ancient Athens was actually far wealthier than just about every country in our modern world.

Today things are obviously quite different for Greece.

With one of the highest debt levels on the planet, Greece is once again on pins and needles waiting for another bailout.

It’s almost comical how this cycle has repeated for nearly a decade. It goes something like this:

Greece’s government almost runs out of money and becomes very close to defaulting on its debt.

Markets panic. Newspapers pump the Greek default story for weeks. Greek citizens spill out into the streets to protest.

Then Germany, the IMF, or the European Central Bank swoops in at the last minute with a tiny bailout that’s just barely enough for Greece to limp along for a little while longer.

And then everyone forgets about it as if the problem is solved… until it resurfaces again in 9-18 months and the entire process repeats.

So we’re right back in familiar territory: Greece is running out of money and the government is desperate for another bailout.

It’s an absurd situation. And even the institutions who provide the bailout money are starting to realize it.

According to a number of internal IMF memos that have been leaked to the press, the Greek debt situation is “unsustainable” and a “disaster”, and they project that there is no chance for Greece to grow its way out of debt.

It’s pretty obvious– even the IMF knows that these bailouts only delay the inevitable.

Like all bankrupt governments, Greece has very few options.

Default is a given; they’ll either have to default on their creditors, i.e. people who were silly enough to loan money to a bankrupt government. . .

… or they’ll have to default on the promises they made to their citizens, like pension payments and even public services.

Once a country defaults, international financial markets adopt a “fool me twice, shame on me” mentality, so Greece will find it very difficult to borrow money.

This means that the government will have to resort to another common tactic in order to make ends meet: printing money.

Of course, Greece doesn’t have control over its printing press right now since it’s officially part of the eurozone.

So Greece will first have to exit the euro… after which they can print as much worthless paper as they want.

Needless to say this currency debasement has the disastrous effect of causing nasty inflation that steals people’s purchasing power.

The final tactic common to bankrupt governments is plundering the wealth of citizens through capital controls.

Given that Greece already took steps to lock down people’s bank accounts in 2015, this is already happening.

Sure, it’s possible that the IMF provides yet another short-term bailout soon, and that this comical cycle repeats itself in a few months.

But whether the inevitable happens this time around or next is irrelevant. Greece’s long-term trajectory is pretty clear.

Naturally this raises an important question: when a country’s future most likely involves default, inflation, capital controls, and financial crises, does it make any sense to keep the majority of your wealth and savings there?

What’s the point of keeping funds in the Greek banking system if they’re just going to freeze you out of your account in the name of economic security?

By the way, this rationale is the same for ANY bankrupt country, not just Greece.

Italy. Portugal. Even the United States. These countries ALL have “net debt” levels in excess of 100% of GDP, and it gets worse every year.

Consider this: last year the US economy grew a tepid 1.6%. Yet at the same time the national debt grew 5.5%– and that was a “good” year.

How sustainable is it that the debt levels keep growing faster than the economy itself?

It’s not unpatriotic to look at objective, publicly available data and question whether that trend is really risk free.

After all, it seems ludicrous to assume that these governments can continue to accumulate debt forever without consequence.

And it’s hard to imagine that you’ll be worse off keeping a small rainy-day fund somewhere with better fundamentals.

Despite most of the world being saddled with excessive debt, there are still a handful of creditor nations like Singapore or Hong Kong with enviable surpluses that surpass even ancient Athens.

If moving funds abroad seems too complex (trust me, it’s not), an even easier option is keeping physical cash in a safe at your home, along with some internationally recognized precious metals like Canadian Maple Leaf gold and silver coins.

There’s very little downside in having a Plan B and ensuring that you have a small emergency fund that’s outside the control of a bankrupt government.

Even if nothing bad happens, you won’t be worse off.

But should more dangerous scenarios inevitably unfold, these simple steps can make a world of difference.