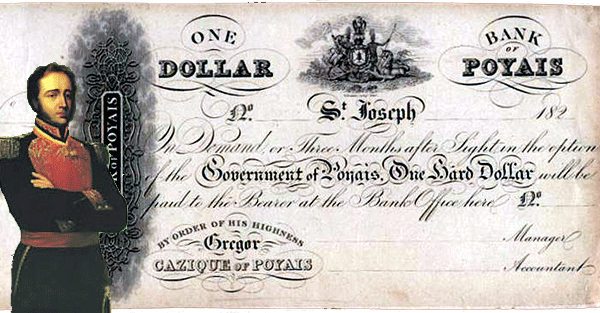 When Gregor MacGregor returned to London he was a real celebrity.

He had just come back from the New World, where he had a number of successful exploits fighting in the South American struggle for independence and was made the Major-General of the Venezuelan republican army by Simon Bolivar—the leader of Latin America’s independence movement.

From within the dinge of Britain, the New World seemed like the land of both sunshine and wealth.

A number of Latin American countries were gaining independence at the time, and investors were frantically trying to get in early to capitalize on the opportunities overseas. The was the first emerging markets frenzy among investors.

When MacGregor, from his first-hand experiences there, told people of the new country of Poyais—where the climate was mild, the natives were friendly, the water pure, and the land fertile and abundant with high-quality timber—it seemed like there could be no better investment.

So in 1822, when he offered a £200,000 Poyais bond at 6%—twice the rate that British government bonds were going for at the time—who could resist?

It didn’t matter that the government of Poyais had no record of collecting taxes nor did it have any systems in place to raise revenue. The bonds would be easily paid back through export-taxes on the resources being shipped back to Europe.

It didn’t matter that the country had not been developed. There were hundreds of people signing up to build up the settlement there.

It didn’t even matter that the country didn’t actually exist.

The bonds were quickly sold and seven ships of people set out for this land of false promises.

The swindle inevitably came to light a few months later, though initially from a decline in confidence over Latin America as a whole rather than the discovery of Poyais’ non-existence.

And as the value of the fraudulent bonds plummeted, MacGregor simply skipped town to Paris, where he implemented the same scheme yet again.

In total, selling bonds for this fake country he made up he was able to raise £1.3 million, which in terms of the size of the British economy, is comparable to about £3.6 billion today.

Thousands of people lost all of their money believing in his well-orchestrated scheme, and some even lost their lives trying to find this land of opportunity to settle.

Though the country is very real, the US government’s ability to repay its bonds is just as fictional as that of Poyais.

The amount of debt it has accumulated has just surpassed the $18 trillion mark, which no level of taxation or economic growth could ever pay off.

And given that Treasury yields are below even the government’s own official rate of inflation, investing in US debt means not only will you not make money in the future, but you’re also losing money by the day.

This is hands down the worst investment out there, yet so many still pile their money into it.

Just as the Poyais’ scheme was unraveled by skepticism of Latin American bonds overall, the spark that turns the trust of US government finances into dust can come from a decline in confidence anywhere in the system.

You could easily brand the hopeful investors and settlers of Poyais as gullible. And there was a clear information mismatch and a lot of unknowns that fraudulent peddlers like MacGregor could take advantage of.

But loaning money on losing terms to the biggest debtor in history that has practically no mathematical chance of ever repaying it today – when all the facts are out there for everyone to see – is a much bigger insult to reason.