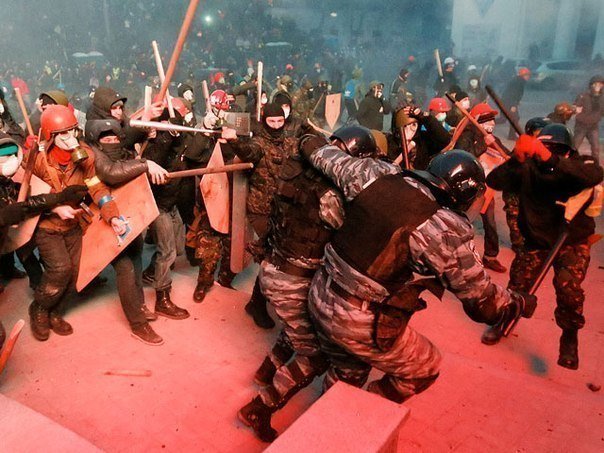 It’s almost exactly like that scene from V for Vendetta.

That’s what’s happening in Ukraine right now. And with reason.

After weeks of student protests over the government’s failure to sign a European integration and association treaty, the police violently cracked down on protestors, and politicians passed a series of new laws in the middle of the night. Among them:

The laws go on and on. It’s Soviet stuff all over again. And people aren’t taking this lightly.

In total defiance of these new laws, the gun-toting police thugs, and the bone chilling winter cold, people are once again out in the streets.

There’s a great video from a few nights ago where the cops were assaulting a few protesters. Then suddenly a swarm of people with nothing more than fists and sticks ran over and began attacking the police.

Watch the video here. (about 60 seconds in length).

Societies, like individuals, have their own breaking points. Citizens can only tolerate so much abuse before enough of them take action. Sometimes that means meeting violence with violence.

I wonder where this line is in the West. Back in the Land of the Free, the government has taken every possible step it can to abuse citizens.

It has enriched banks at the people’s expense. It has robbed the masses of the purchasing power of their savings. It has destroyed liberties, indebted future generations, raised taxes, and regulated the most fundamental aspects of our lives.

All of this has been done shamelessly, unapologetically. For example, President Obama’s “solution” to the NSA spying debacle is to simply outsource the metadata storage to some unknown company.

Pathetically, this is what passes for liberty in the Land of the Free today.

Yet while Ukrainians have clearly reached their breaking points and are fighting it out in the streets for their freedom, it remains unclear where North Americans and Europeans draw the line. Most people don’t seem to care.

Fortunately, anyone who actually values liberty doesn’t need to wait around for Ukrainian-style armed revolution.

The world is a big place, and there are a number of options to reduce our exposure to bankrupt, insolvent, destructive governments.

Every single person who holds dollars in a US bank account, for example, is entirely beholden to the whims of the Federal Reserve Board of Governors.

You can substantially reduce this exposure by moving funds to a place like Norway or Hong Kong, holding krones or Hong Kong dollars.

Or even still, owning precious metals at a foreign depository in a place like Singapore.

You can further reduce your risk and exposure to your home government by obtaining a low-cost second residency in a place like Chile or Panama, to ensure that you always have another option.

There are a plethora of solutions– individual solutions– that anyone can take advantage of. And in doing so, we are relying on ourselves. Not on our neighbors. And definitely not on government.