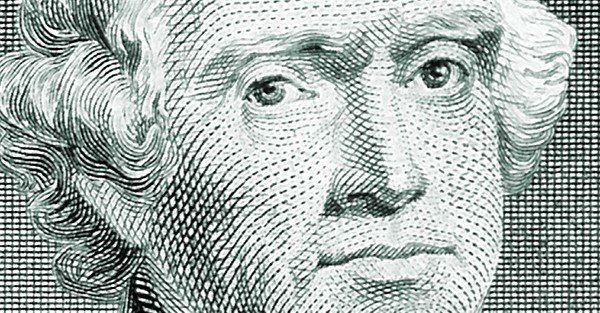 On May 28, 1816, Thomas Jefferson penned a letter to his friend John Taylor deeply criticizing the use of debt to fund a government’s excessive operations:

“[T]he principle of spending money to be paid by posterity, under the name of funding, is but swindling futurity on a large scale,”

Public debt is a weapon of mass destruction that constitutes theft upon future generations.

And as Jefferson argued in the letter, every new generation has the right to be born onto this planet unencumbered by the debts racked up by their ancestors.

But that’s not the way it is anymore.

Governments, like many individuals, no longer follow the Universal Law of Prosperity: produce more than you consume.

Instead there’s a sense of entitlement.

Politicians seem to believe that because the US is the dominant superpower, its balance sheet doesn’t matter, and the government can spend as much as it wishes.

All of this is enabled by a financial system where unelected central bankers conjure money out of thin air and loan it to the federal government so that no hard choices ever really need to be made.

(This system reflects Jefferson’s words in the same letter that “banking establishments are more dangerous than standing armies. . .”)

But this is incredibly dangerous and short-term thinking.

By its own financial statements, the government of the United States is insolvent.

Several of its major trust funds and institutions are already insolvent, or quickly heading that way:

These examples don’t even scratch the surface, and the total level of government insolvency, just at the federal level, goes into the tens of trillions of dollars.

In response, the people in charge of this mess have continually and habitually ignored it.

There was the incredibly embarrassing debt ceiling crisis of 2011 when Congress maxed out the national credit card. Back then the debt was ‘only’ $14 trillion.

And they dealt with the problem by ignoring it.

Then in 2013 it all blew up again in yet another debt-ceiling crisis when the national debt hit $17 trillion.

Yet still they slapped an absurd band-aid fix on the problem, enabling them to kick the can down the road once again.

Congress hit the debt ceiling back in March, and ever since, the Treasury Department has resorted to “extraordinary measures”, i.e. stealing from pension funds, to keep the lights on.

Their solution is to have once again waited until nearly the last minute to kick the can down the road– this time with a ‘stopgap funding measure’ that will make the issue blow up again in early December, barely two months from now.

It’s not like they didn’t have six months, or two years, or four years, or several decades to figure this out.

But it never happens… because the culture in banana republics like this is to ignore problems until they become so enormous they are beyond solving.

This gang of sycophants has had innumerable chances to fix the problem that they themselves created. And they failed at every occasion.

Expecting anything different from them is foolish.

Here’s how this ends: one day they’re going to kick the can to the end of the cul-de-sac and there will be no more road remaining.

That’s when real action will need to be taken.

But at that point, the only options on the table will be default. Confiscation. Capital controls.

All of which are enormously destructive and have the potential to tear through society like a wild boar.

In the same letter from 1816, Jefferson wrote about the dangers of reckless overspending and borrowing from banking establishments to go into debt:

“I contemplate it as a blot left in all our constitutions, which, if not covered, will end in their destruction.”

Jefferson may soon be proven right.

Amazingly enough, however, for anyone paying attention, the warning signs are as plain as day.

The government is practically jumping up and down waving its hands to show that they’re (a) incompetent, and (b) completely insolvent.

And yet, people in the west still fail to connect the two dots. They think ‘those things can’t happen here.’

Well, they can. No nation is immune to the powerful gravitational pull of debt… and stupidity… both of which are in abundance in government.

Are the chances of a complete meltdown 100%? Of course not. There is very little certainty in this world.

But to believe that the chances of financial calamity are non-existent is a fool’s fantasy that’s just begging for people’s life savings to get wiped out.

These are major risks with a likelihood that is far higher than people expect. They should be treated as such… with sensibility and reason, not panic.

There’s no downside risk in ensuring that you don’t become a victim to such obvious financial dangers.

And certainly no benefit in pretending they don’t exist.