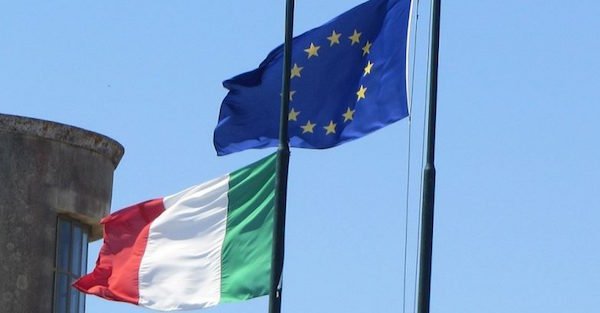 There simply is no good starting point.

You can’t talk about the decline of Rome without a lengthy discussion of how destructive Diocletian’s Edict on Wages and Prices was in the early 4th century.

But you’d have to go further back than that and discuss all the lunatic emperors preceding him, all the way back to Caligula.

But you can’t talk about Caligula without bringing up the effects of the civil war between Octavian and Marc Antony… which was a direct result of the previous civil war between Julius Caesar and Pompeius Magnus.

Before long you’ve gone back in time more than 500 years trying to figure out why the Roman Empire collapsed.

Modern Italy isn’t so different. After all, this is a country so unstable that it’s had 64 governments in the seven decades since the end of World War II, averaging a new government every 14 months.

That has to be some kind of world record.

And to accurately diagnose how Italy ended up in such dire financial and political turmoil, you’d have to go back a -very- long way.

But for the sake of brevity, we’ll just go back to March. Italy held elections, and the “5-Star Movement” political party won the most seats… but not a clear majority.

This required them to establish a coalition with other political parties, which took weeks of haggling and negotiating.

But finally the 5-Star Movement was able to hammer out a deal and present a formal plan to Italy’s head of state, President Sergio Mattarella.

The President of Italy is almost purely a ceremonial role, like the Queen of England. But he does have the authority to reject key government appointments, including Prime Minister and Finance Minister.

And that’s exactly what he did– specifically opposing the nominee for Finance Minister, an economist named Paolo Savona.

Savona is a huge critic of the euro, and President Mattarella thought him too dangerous for the post.

Again, while the origins are more complicated than that, this is the basic plotline behind the most recent crisis.

Late Thursday night the Italian government announced a compromise, supposedly bringing an end to the uncertainty.

But to me, none of that matters. What I find -really- important is what an enormous impact this soap opera had across the world. And I think there are three critical lessons to take away:

1) On the day that the finance minster was rejected, financial markets worldwide tanked.

Italy’s stock market plunged 5%, which is considered a major drop.

But curiously, the stock market in the US fell as well, with the Dow Jones Industrial Average shedding 400 points. Even markets in China and Japan had significant drops as a result of the Italy turmoil.

Now, it’s easy to see why Italy’s markets fell. And even the rest of Europe. But the entire world?

Granted, a lot of people made a really big deal out of this event, concluding that it signals the end of the euro.. or Europe itself… or some other such drama.

Sure, maybe. But it’s almost impossible to foretell a trend as significant as ‘the end of the euro’ based on a single event.

At face value, the rejection of a cabinet minister in Italy should have almost -zero- relevance on economies as large and diversified as the US, China, and Japan.

To me, this is another sign that we’re near the peak of the bubble… and possibly already past it.

Markets are so stretched, and investors are on such pins and needles, that even a minor, insignificant event induces panic.

And it makes me wonder: if financial markets are so tightly wound that something so irrelevant can cause such an enormous impact, how big will the plunge be when something serious happens?

Bear in mind that stocks are volatile by nature; prices move much more wildly than other asset classes.

But bonds, on the other hand, are supposed to be safe, stable, boring assets. Especially government bonds in highly developed nations.

In Italy the carnage was obviously the worst.

Investors dumped the 2-year Italian government bond, and yields (which move opposite to prices) surged from 0.9% to 2.4% in a matter of hours.

Simply put, that’s not supposed to happen. And it hadn’t happened in at least three decades.

Again, though, even in the United States, yields on the US 10-year note dropped 16 basis points overnight, from 2.93% to 2.77% (which means US bond prices increased).

To put it in context, the only day over the past few YEARS that saw 10-year yields move more than that was the day after Donald Trump won the US Presidential Election in 2016.

So it was a pretty big deal.

Again, this leads me to wonder: if safe, stable assets like government bonds can react so violently from such an insignificant event, how volatile will riskier assets be when there’s an actual crisis?

Just imagine what’s going to happen to all the garbage assets out there (like unprofitable, heavily indebted businesses) when a real downturn kicks in.

3) Perhaps most importantly, nobody saw this coming.

Even just six months ago, it’s doubtful anyone would have predicted that the rejection of Italy’s finance minister would cause a global financial panic.

And yet it happened.

This is one of the most critical lessons of all: whatever causes the next major downturn can be something completely obscure and unpredictable. And no one realizes it until it’s too late.