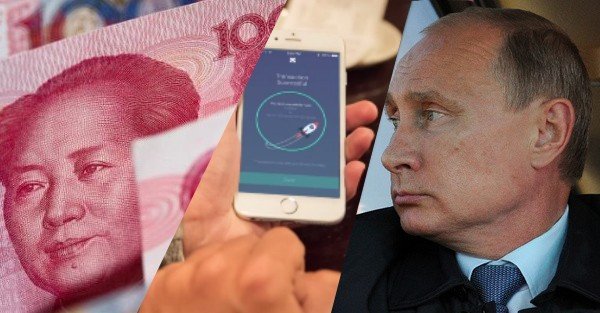 When I was a kid growing up in the early 80s, the United States was the undisputed dominant superpower in the world.

The US dollar was awe-inspiring; on a trade-weighted basis, the dollar index was at an all-time high, and had never been as strong ever before… or since.

And the dollar’s strength was backed by something real. The US economy was strong. Debt was low. Interest rates were actually greater than zero.

I remember watching Ronald Regan on TV when he told Mikhail Gorbachev, and the entire world to ‘tear down this wall’ from West Berlin.

And within a few years it happened. The Soviet Union collapsed, leaving the United States as the victor in the Cold War.

US geopolitical, economic, financial, and military power was completely unchallenged. And it would remain that way for years.

And while the US may still be the leading power in the world, its dominance is being rapidly chipped away.

1) The dominant international force in the Middle East is now… Russia.

There has been a LOT of tough talk by the US government about Syria over the last few years, including tough-guy promises about military action if Assad crossed a line in the sand.

Assad crossed it. He used sarin gas on his own people—the infamous ‘red line’ that Barack Obama said would trigger a military response from the US.

Yet there was no US military response.

Instead, Vladimir Putin has actually been helping prop up the Syrian regime, as well as unilaterally bombing ISIS targets in the region.

And the Chinese government has sent its own warships to Syria.

Meanwhile, Iran has just test-fired a brand new long-range missile system, something that may very well violate the terms of the much-heralded nuclear deal.

All of this goes entirely against the wishes of the US government. And yet they’re absolutely toothless to do anything about it.

The US may still have the most lethal military in the world. But even the most powerful combat force is ineffective if the government is too broke to deploy it.

2) China has launched its own competitive international banking network

Bank payments for global trade that transit from Bangladesh to Brazil, for example, are typically routed through the US banking system in New York, and settled in US dollars.

China finally got tired of it. And, a few years ago, they started working on an alternate system whereby international payments no longer needed to clear through the US.

So far CIPS is just been being provisionally tested; 11 out of 19 banks using it are Chinese (and state-owned).

But many large banks, particularly in Europe, have already signed up.

If successful, CIPS could take away substantial market share from the US banking system, giving foreign banks and governments less and less reason to hold US dollars and US government debt.

3) There’s an epic revolution in the global financial system

Seven years ago, central bankers from around the world coordinated policy moves to set interest rates at 0% (or even negative) and conjure trillions of dollars, yen, renminbi, euros, etc. out of thin air.

Around the same time, digital payments technology known as Bitcoin was invented.

Bitcoin represented a very 21st century way to hold savings outside of the conventional financial system, like a digital form of gold.

Since then, the technology has become much more widely adopted, spawning brand new thinking and a digital revolution in finance.

Technology now makes it possible to completely eliminate banks as a financial intermediary—a highly centralized middleman standing in the way between you and your money.

You can now send and receive funds, transfer money internationally, exchange foreign currencies, borrow money, and invest your savings, better, faster, and cheaper than ever before, and all without using a bank.

Banks have been some of the most powerful institutions in the world for over seven centuries.

But that dominance is now in danger of being replaced by new technology that grows at a far more rapid rate than banks can possibly match.

About six weeks ago, Fintech companies Zazoo and BitX joined forces to create a new product allowing consumers to load virtual prepaid credit cards with cryptocurrency (like bitcoin), and use the cards to by products online.

All three of these are very clear signs that the system is changing.

The old structure in the world—a system dominated by the US government, US banks, and the US dollar—is finished.

The US is in decline. The US government is overloaded with debt. The US financial system is losing is dominance. And even the banking institutions themselves are losing relevance.

History shows that these things change. No nation retains the #1 spot in the world. No international reserve currency lasts forever.

Rather than cling to the old ways, embrace the change. And educate yourself about what’s happening.

There are fortunes to be made for people who understand these trends and get out in front of them.