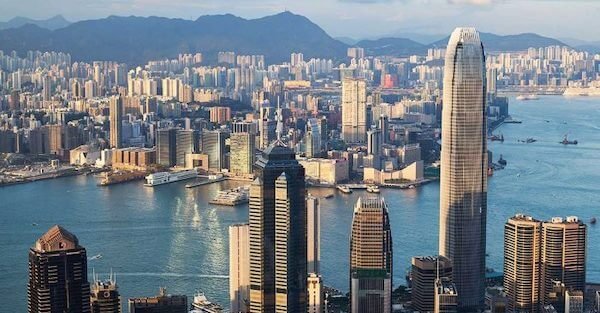 Hong Kong has for decades been one of the most stable places in the world.

When the British took Hong Kong over in the late 1800s, it was nothing more than an irrelevant backwater made up of fishing villages and illiterate fishermen.

But after a few decades, it became one of the most prosperous places in the world.

And that wasn’t an accident. Hong Kong allowed unbridled capitalism to dominate and it worked extraordinarily well.

Sure, a handful of people got super wealthy. But, in general, there’s been bountiful prosperity across the board.

As a result of the prosperity and bent toward capitalism, Hong Kong has become one of the most important financial centers in the world. And for decades, it’s had a very well capitalized banking system.

And one of the key reasons for that is the Hong Kong dollar (HKD) has been pegged to the US dollar (USD) since the early 1980’s.

The peg is a double-edged sword for Hong Kong.

The key advantage is international stability. As long as the USD remains the global reserve currency, the fact that it’s interchangeable with HKD means economic stability.

The disadvantage is that the peg doesn’t give Hong Kong any independence. They have to follow US interest rate policy regardless of whether or not it’s good for them.

And that’s definitely caused problems, which are accelerating this year.

The US is just coming off a decade of ultra-low interest rates meant to boost domestic growth. But HK, which wasn’t in a dire, economic situation to begin with, has also had a decade of low rates.

One of the results of that is that Hong Kong has become one of the most expensive property markets in the world. It makes London look cheap.

And the property market in Hong Kong is highly leveraged. People typically get bank loans to buy property without putting much money down.

And a lot of those loans are like what we saw in the US in 2008 – no money down, low teaser rates, variable rate loans, etc… the type of lax lending that rocked the entire financial system.

I expect we’ll see a similar, financial crisis in Hong Kong down the road as a result of this lax lending against property.

So the local mortgages will reset at higher rates that people can’t afford. I expect we’ll see a wave of defaults that will slam the banks big time.

If that were the only problem in Hong Kong, I wouldn’t be terribly concerned because the banks there are so well capitalized.

However, the ongoing dispute between the US and China adds another risk.

The US-imposed sanctions against China are problematic and will force the Chinese to scramble for the dollars they need to engage in international commerce. Even though the dollar isn’t the local currency, China still needs dollars to buy oil, copper and pretty much everything else on the global stage.

And that takes a steady supply of dollars.

Right now, China gets a lot of USD from the US, because China runs a big surplus with the US. And those dollars fund China’s deficit with its other trading partners.

If that dollar supply gets cut off because of a trade dispute, China will need another supply.

And where is there a giant supply of dollar’s available for the Chinese?

Hong Kong is sitting on around half a trillion USD.

In a crisis, China could take those dollars and repeg the HKD to the renminbi.

I’m not saying that’s likely. But it’s more of a possibility now than it has been in the past. And things change.

Still, I felt compelled to raise this with you as a potential risk – albeit a somewhat minor one.

I’ve often discussed holding HKD as a risk-free way to hold USD. If the USD ever tanked, Hong Kong could remove the peg and allow the HKD to float freely.

But this new risk changes the situation…

Enough so that I’m taking my money out of HKD and reducing my exposure to Hong Kong banks.

I don’t think this will become a major catastrophe or that this HKD scenario is even that likely. But it is riskier than it was.

It’s sensible to take some money off the table. The HKD trades in a tight band with the USD and it costs very little to switch in and out.

And you can put that money into 28-day T-bills, which are yielding over 2%.

If I had to choose between making 2%+ in T-bills and the potential threat of the HKD being repegged to renminbi, I’m taking T-bills.

This week I’m telling Sovereign Man: Confidential readers more about what’s happening with the Hong Kong dollar and what they can do about.

But for now, I think it makes sense to take some money out of HKD. It makes sense regardless of what may or may not happen in the future.

And like many things we discuss regarding a Plan B, there’s no downside.