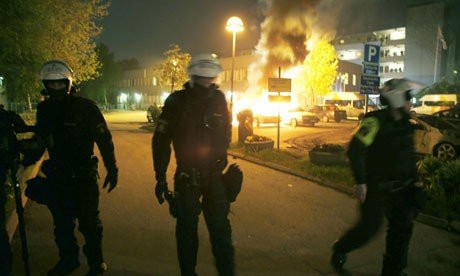 Anytime a free market guy rails against central planning and socialism, there is always someone who stands up and says “what about Sweden?”

Ah, Sweden… a socialist’s paradise… a place where taxes are among the highest in the world, few people are wealthy, and the government is involved in people’s lives from cradle to grave.

And in all of these government surveys on ‘happiness’, places like Sweden, Norway, and Denmark consistently rank among the happiest countries in the world.

Well… the veneer is cracking.

Though the coverage has been limited, there’s been rioting in Sweden over the past week, specifically in the immigrant-dense suburbs around Stockholm where 80% of the population are first or second-generation immigrants.

Dan West, my right hand man at Sovereign Research, is actually Swedish and on the ground right now in the country. He recently sent me a note describing the situation:

Seeing photos and video of this you’d think it was a war zone in some unstable part of the world, not Stockholm.

Allegedly it started last week because the police fatally shot a 69-year-old man who wielded a machete in public. Now people are angry and destroying things.

Swedish politicians say the root causes of these riots are inequality of the immigrant minorities.

Bear in mind, this is a place so obsessed with equality that the words “him” and “her” have been blended into “hem”… and taxpayers fork over 70% of their income to ensure that everyone can live to an equal level.

But to those of us living outside of this statist bubble, the real problem is obvious: however well-intentioned they may be, welfare states almost always attract people who want to be taken care of at the expense of others.

And ultimately this engenders serious conflict… between those who are on the receiving end, and those on the paying end.

Occasionally this conflict becomes violent. And that’s exactly what’s been playing out.

The government has all sorts of propaganda to influence the way Swedes view the welfare state and convince us that we should pay huge taxes to support others.

In other words, we should not be economically free so that others can live for free. This is the definition of a welfare state.

And in addition to such ‘thought controls’, the Swedish government also rules with capital controls, people controls, and media controls.

The government here tries to churn citizens out as if we’re widgets coming off a factory line, influencing everything from what we think to how we spend our time.

Yet despite such a finely-tuned system, the capital suburbs practically turned into a war zones over the past week.

The politicians here claim it can all be fixed with more redistribution of wealth. It’s not enough that the average working Swede pays ~70% in taxes; if only they could extract 80% or 90% in taxes, they could solve everything!

If all you have is a hammer, everything looks like a nail.

People have the wrong idea of this place. It is not a well-functioning welfare state. Any system based on giving people something for nothing, and sticking hard-working, productive citizens with the bill, is doomed to fail. Sweden is no exception.

People in North America who are rapidly being dragged into a welfare state should pay very close attention… because this is the future that awaits.”