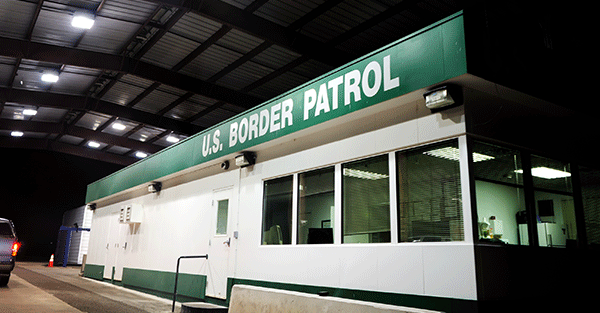 Have you lost that loving feeling? If so, the United States federal government might just be able to help.

Before you swipe right on Tinder or update that eHarmony account, consider instead taking a quick trip out of the country.

Because on your way back home into the Land of the Free, US Customs and Border Protection will have agents standing by ready with heaps of government stimulus.

It happened to a Jane Doe (the name has been withheld to protect what little remains of her dignity), a 54-year old US citizen who had recently been on a trip to Mexico.

As she was returning home via the Cordova Bridge border crossing in El Paso, she was randomly selected for extra special screening and escorted to a private area.

I’ve been there. It’s not fun. They don’t tell you anything, and they don’t say why.

They act very aggressively and start barking orders at you as if you’re already a prison inmate.

Quite frequently you can sit there wasting away for hours. Fortunately for me, nothing particularly sinister ever happened. For Ms. Doe, it was quite the opposite.

According to the published case files, she was frisked, and then ordered to squat so that a drug-sniffing dog could check out her nether regions.

Apparently the dog liked what he smelled, because Ms. Doe was then taken to yet another room, ordered to pull down her pants, and crouch.

At that point an agent from Customs and Border Protection “inspected her anus with a flashlight.”

She was then ordered to lean backwards in a crouched position, after which another agent inserted a speculum into her vagina to search for drugs.

Another agent then “parted Ms. Doe’s vulva with her hand, pressed her fingers into Ms. Doe’s vagina, and visually examined her genitalia with a flashlight.”

They then took her to a hospital for a further 6 hours of involuntary testing, which included forcing her to have a bowel movement as they all watched, plus X-rays, CT scans, and more.

I know what you’re thinking– they probably found a treasure trove of cocaine and methamphetamine shoved deep inside Ms. Doe’s womanhood.

Ms. Doe was “brutally probed against her will” for hours and hours without judicial oversight, due process, or even reasonable suspicion. And they found nothing.

Here’s the really disgusting part: at the end of this ordeal, they released her without charge… with one catch.

They told her that if she signed a consent form, retroactively giving her permission to be abused and violated, that the government would pay for all the tests and various medical expenses.

But if she didn’t sign the consent form, she’d have to pay for them all herself.

Ms. Doe refused to sign, and the United States government sent her a bill for more than $5,000, essentially demanding that she pay for her own sexual assault.

Emotionally shattered she went home feeling like a rape victim. She sued.

And, as the pitiful justice system in the Land of the Free is far from swift, it took over three years for the case to gain any traction.

But as you can imagine, there were strings attached, specifically that the settlement should “not be taken as an admission of liability or fault.”

I guess it’s Ms. Doe’s fault. She must have been asking for it. It’s like a classic rape story from the 1950s. Absolutely appalling.

But just think about what this means–

Gun-toting government thugs are running around committing sexual assault on US citizens so they can continue waging a costly and utterly ridiculous war on plants.

Apparently doing so is quite typical. So typical, in fact, that they have a consent form ready to be signed by their gang rape victims in the hopes of keeping it quiet.

And even if it doesn’t stay quiet and one of the victims goes public, the government refuses to admit its own culpability and pays them off with taxpayer funds.

Just think about that: YOUR tax money is going to pay off the US government’s sexual assault victims.

This is so disgusting, so vile… I would ask you just one simple question: have you reached your breaking point yet?