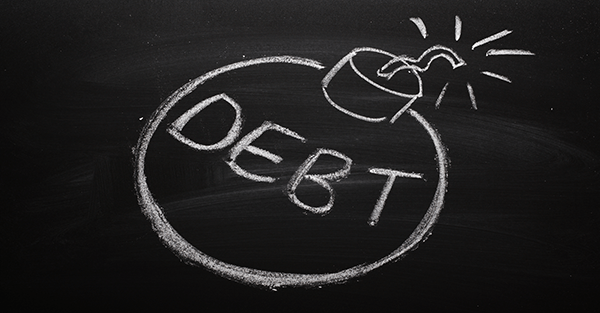 According to the latest statement issued yesterday afternoon by the Department of Treasury, the US national debt has reached $19,976,826,951,047.80.

(The government is typically a day or two behind when it sends out these reports.)

That number itself is obviously remarkable, just shy of $20 trillion.

But what’s even more astounding is that, according to the Treasury Department’s own figures, they STARTED the day with a debt level of ‘just’ $19.879 trillion.

So literally in the span of a single 8-hour workday, the US government amassed an astonishing $97 billion in debt.

That’s simply incredible– $97 billion is larger than the entire GDP of New Mexico or Luxembourg. In 8 hours.

I review these reports every single day. Needless to say, an increase of this magnitude occurs… almost never.

And when I saw it yesterday afternoon, the “Holy Shit!” that came out of my mouth caused a rush of staff into my office asking “What happened?!?”

As I recovered from my shock, I explained that the US federal government had increased its debt by nearly $100 billion in a single day, to which one of them asked,

“What did they buy?”

I thought it a brilliant question, almost child-like in its simplicity. Indeed. What did they buy?

How many aircraft carriers did they purchase?

How many colonies on Mars did they build?

Did President $20,000,000,000,000BAMA acquire a controlling stake in the Walt Disney corporation on behalf of the taxpayers of the United States?

Did Congress suddenly recapitalize the FDIC, or any one of the half-dozen insolvent US trust funds?

Perhaps they fixed a decent portion of the nation’s crumbling infrastructure.

Or maybe they just decided to send a check for almost $1,000 to every household in America.

The reality is that these people indebted every single taxpayer, including future generations of taxpayers who won’t even be born for decades, with a massive bill that has almost no mathematical probability of ever being paid down.

And despite this prodigious debt, the government has absolutely nothing to show for it.

What’s really amazing is that this isn’t even unusual anymore.

The national debt in the United States is already much larger, and is growing much more quickly, than the US economy.

Plus, interest rates are rising from their historic lows.

This works out to be an average interest rate of 2.204%, according to the Treasury Department’s most recent data from November 2016.

But it wasn’t that long ago that interest rates were MUCH higher.

Back in January 2008, for example, the average interest rate on US government debt was 4.785%.

And even that was considered quite low by historical standards.

Today’s rates are less than half that level. And it’s reasonable to expect rates to increase. In fact, that’s already happening.

In late December, the Treasury Department sold $28 billion worth of 7-year Treasury notes at a yield of 2.24%.

2.24% is still pretty cheap. But it’s nearly double the rate from just six months ago.

This is a significant increase in a short period of time.

If the government’s average interest rate returned to 2007 levels, they would be spending nearly $1 trillion each year just to pay interest.

That’s more than they currently spend on Medicare or the US military.

So as you can see, the US government is not only increasing the debt level at an astonishing rate (with absolutely nothing to show for it), but they’re going to have to start paying a LOT more interest.

It’s a never-ending cycle that only ends one way: default.

The idea of ‘growing their way out’ of debt is a total fantasy.

The debt level is growing much faster than the economy, so each year the hole becomes even deeper.

They’ll either have to default on their creditors, causing a massive catastrophe across the global financial system…

… or they’ll have to default on the promises they’ve made to taxpayers.

You might be thinking– “Can’t they just cut government spending?”

No. Again, not without defaulting on taxpayers.

The three biggest line items in the budget that mop up almost ALL government spending are:

Everything else COMBINED is trivial by comparison.

So cutting spending quite literally requires a default on the promises they’ve made to taxpayers.

This includes everything from Social Security to maintaining a stable financial system without resorting to major inflation or capital controls.

None of this means there’s going to be some spectacular collapse tomorrow morning.

The sky is not falling.

In fact, despite this debt madness, we’re living in a world full of incredible business, investment, technological, and lifestyle opportunities.

It’s truly an incredible time to be alive.

But the rapid rise in interest rates coupled with an astonishing increase in the debt creates an obvious long-term trend with major consequences that anyone would be foolish to ignore.