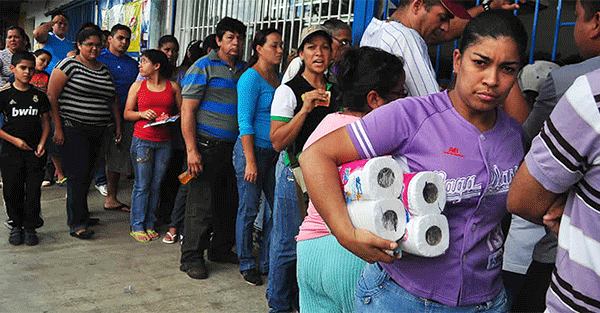 At two in the morning, Krisbell quietly slips out of bed so as to not wake the two small children curled up next to her.

She grabs her phone and quickly dials her friends’ numbers as she’s already headed out the door to get the day’s intelligence report.

Most importantly—where is milk, sugar, and toilet paper being sold today?

From the moment price controls were levied in the country, there were shortages of everything in Venezuela.

Each month, it’s become increasingly difficult to get basic goods. And the lines are growing longer and longer.

Not everyone can afford to wait in line half the day just to get a few supplies.

And since you can’t even get everything in one store, it takes the second half of the day to get the rest of what you need—if there’s even anything left by then.

Friends and neighbors had started coming to Krisbell, asking her if she could help them get things from the grocery store.

They all have to work just to be able to afford the food in the first place, and they can’t spare the time to stand in line.

So (as reported by Bloomberg) Krisbell started taking on clients. Now she has enough that she’s earning her entire living from waiting in line.

Imagine—an entire cottage industry (absurd as it may be) now exists in Venezuela because of destructive government polices.

Everyone in the country has to pay extra for their basic goods, while others dedicate their professional lives to the unproductive task of standing in line.

(If this seems far-fetched, consider that the US tax preparation industry takes in $6 billion annually for dedicating itself to the unproductive task of filling out Byzantine tax forms…)

There’s no limit to the stupidity and destructiveness of people in power, and Venezuela’s President Maduro is a prime example.

This man (and his predecessor) took the country with the largest oil reserves in the world and crippled it to the point that Venezuela now imports oil.

And that was before oil prices plummeted. Now the country is even weaker.

Venezuela’s government is now on the brink of defaulting on its financial obligations… just as it has already defaulted on its obligations to its citizens.

It’s a sad example of what governments do when they go bankrupt.

Almost invariably they manipulate the currency and print money.

This eventually causes inflation to get out of hand and prices to soar. They try to control it by imposing price controls.

And because it becomes unprofitable for businesses to produce at artificially low prices, shortages ensue.

Then they institute capital controls to trap money inside the country.

This movie has played out so many times before. And yet people rarely learn.

The consequences of terrible decisions creep up gradually, and then suddenly. Most people don’t realize what’s happening until it’s too late.

But it all starts with a bankrupt government and decades of destructive policies.

We’ve all seen what’s happened with Venezuela. If you’re in a bankrupt nation, make sure this doesn’t affect you. Make sure you always have a Plan B.

Part of this includes having a rainy-day bank account in a secure, offshore jurisdiction. In many places, this is getting harder to do, but here’s one simple trick to help you set up a non-resident foreign bank account.