What China’s devaluation means for the future of the dollar 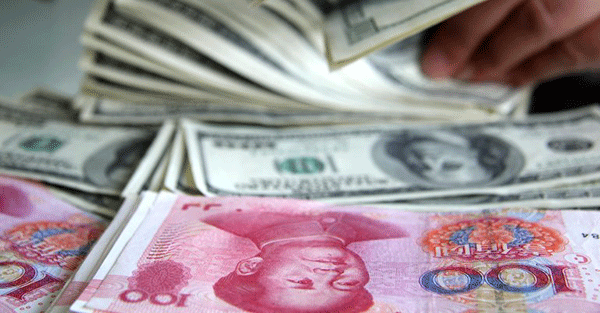 (… to which George W. Bush famously added after flubbing the aphorism on live TV, “can’t fool me again!”)

For months, despite every shred of data pointing to a weaker economy, China’s currency has been strengthening.

This was really counterintuitive. When an economy is weak, its currency tends to suffer.

But that didn’t happen in China.

Even when China’s stock market suffered one of the biggest crashes in history a few weeks ago, the currency barely moved.

Just look at Greece– problems in that single nation, one of the smallest economies in Europe, dragged down the currency used by 18 other nations in Europe to its lowest level in more than a decade.

But when problems broke in China, the renminbi actually got stronger. And party bosses insisted that they would not devalue their currency.

Yesterday they showed the world what their promises really mean: nothing. And in a surprise announcement, they devalued the renminbi by roughly 2%.

Curiously, in the very same announcement, Chinese officials stated that they would not devalue the currency again, and that Tuesday’s move was a one-time thing.

Less than 24-hours later they did it again — a second devaluation that saw the renminbi tumble to as low as 6.57 per US dollar, a 6% decline in roughly 36 hours.

Again, this is a steep drop for a currency, and I expect that there’s more to come.

(Our Chief Investment Strategist Tim Staermose has been predicting this for quite some time– premium members, we’ll send out an update shortly on his investment recommendations.)

All of this raises an interesting question about the future of the US dollar.

Because if an economy as large and powerful as China’s has had to concede defeat, does this mean that “King Dollar” will rule forever?

Remember that the dollar’s strength is derived from its status as the primary global reserve currency.

Nearly every government, commercial bank, and central bank in the world holds US dollars in reserve, and the dollar is used as the primary currency in global trade.

But this status is by no means written in stone. The US dollar is not the first global reserve currency, and it won’t be the last.

We can go back in time to the Byzantine solidus, or the Venetian gold ducat, or the Spanish dollar, or the British pound, and see that no reserve currency lasts forever.

Especially when its fundamentals are so poor.

The US government is insolvent. Its major institutions and pension funds are insolvent. The central bank is borderline insolvent.

These are not any wild assertions; their own financial statements admit their insolvency.

Which means that there’s nothing underpinning the dollar’s reserve status except confidence.

And confidence is very fickle. Like a high school popularity contest, it wanes and it booms.

Right now that confidence is on an upswing, primarily because every other major option looks really bad.

The euro is acting out its Oedipal complex. Japan is a complete fiscal disaster spending over 25% of tax revenue just to pay interest. And China is rapidly deteriorating.

Sure there are some outliers like the Swiss franc that are in better shape. But the market for Switzerland’s currency is far too small to absorb trillions of dollars in global capital flows.

In the beauty pageant of major currencies, the US dollar is clearly the least ugly at the moment.

And I think anyone owning dollars should look at this as a gift.

Right now we have a tremendous opportunity to sell what’s expensive and buy what’s cheap.

I’m looking at real estate in Colombia at the moment where US dollar buyers can pick up high quality property for less than the cost of construction.

In Chile, the cheap exchange rate and slowing economy helped our fund to recently close on a farm at $4.3 million that cost $10 million less than two years ago.

In Australia there are a number of junior mining stocks that are trading for less than the amount of cash that they have in the bank.

(Again, premium members please expect a forthcoming alert on this.)

There are countless deals like this all over the world… especially if you’re buying in US dollars.

It’s foolish to expect that any reserve currency will last forever.

And it’s even crazier to expect a reserve currency with such pitiful fundamentals as the US dollar to last forever.

But markets are not orderly and efficient. They are chaotic.

Which means that, on rare occasions, enormous opportunities present themselves to buy high quality assets on the cheap.

That opportunity is now.