What do the Paris riots and Japan’s lack of sex have in common? 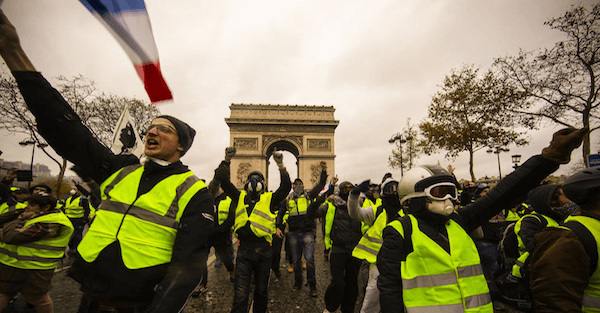 Looters smashed out shop windows and took whatever they could carry away. Ancient landmarks were desecrated.

Soldiers patrolled the wreckage as tanks are parked on the street corners.

Have aliens attacked? Was a third world dictator deposed? Did the government demand the sacrifice of the first born of each household?

Nope. France increased taxes on gas by a few cents per gallon. That is what sparked the “yellow vest” riots that have burned through Paris.

Here’s the strange part… the same thing made them pop champagne a couple years ago.

People celebrated in the streets when the Paris Climate Accord was ratified, excited that governments were finally doing something to curb climate change.

Two years ago, the Arc de Triomphe was lit up with the message, “Accord DeParis c’es fait!” meaning “Paris agreement is done!”

Now the Arc de Triomphe is graffitied with the message, “We’ve chopped off heads for less than this.”

It’s not that I think taxes on gas should be raised. It is just remarkable that such a small tax increase could spark such pandemonium.

Everyone demands the government step in to deter carbon emissions. And when that happens, everyone freaks out.

Inevitably, political solutions to large problems get watered down by politicians, or stopped by mass hysteria.

It’s the same story all over the world. Consider Japan…

Japan has a demographic problem, to put it mildly.

Each Japanese woman is only having about 1.4 babies over the course of her lifetime. Any fertility rate under 2 means the population is dwindling.

1.4 means the population is about to drop off a cliff.

Japan has the largest percentage of over 65 year olds in the world—almost a third of its population. Soon there won’t be nearly enough people paying into the retirement system to take care of the aging population.

Of course it’s not just Japan having pension problems… pensions around the world are woefully underfunded.

But it’s not just pensions in Japan. They don’t even have enough people to fill jobs to care for the elderly.

This is a small step towards easing strict requirements to get residency in Japan. They need to prove they or a relative supporter are worth at least $1,600 per month. And they still have to know how to speak Japanese to qualify for the program.

The culture is very isolationist, even xenophobic. Only about 2% of Japanese residents are foreign born.

If the Prime Minister’s drastic measures are approved later this month, Japan will allow a whopping 345,000 new foreign workers into the country.

That is a 0.27% increase in population… Nice try Japan.

And when you finally can’t ignore them anymore, it’s way too little and pathetically late.

So unless Prime Minister Abe wants to make the initiative personal, and start impregnating vast swaths of the Japanese population with some version of prima nocta… his solution is a drop in an ocean of problems.

But if a politician does anything that might actually solve the problem, watch their approval ratings plummet.

For years Vladimir Putin has maintained extremely high popularity. He was re-elected with 77% of the vote this past March.

But even shirtless horseback riding can’t save his approval rating after he raised the retirement age for pension benefits by five years (a move that needed to be done in order to save the Russian retirement system).

This is one of those hard truths about pensions and Social Security that we have been talking about… Something has got to give.

That could be raising the retirement age or cutting benefits. But there is no magic spell that will put pensions back on track.

Now Russian men must wait until 65 to retire with benefits, and women 60.

After announcing this change, Putin’s approval rating dropped over 20 points from the election, to 56%. That’s low for a Russian authoritarian like Putin. Those who disapprove almost doubled from 17% to 33%.

So there are your solutions. You get watered-down, ineffective actions from politicians. Or you get pissed-off rioting crowds that stop anything from changing.

So if you want change, you’ve got to form your own solution.

Hopefully it won’t include flipping cars and smashing windows.

It should include becoming a better investor. Save a little more, get a little better return, and end up with hundreds of thousands of dollars extra a few decades later.

Otherwise, you’re leaving your fate up to pension fund directors who are betting your money on risky real estate, like we talked about last week.

You can also take advantage of different structures for retirement savings, like a solo 401(k) or a self directed IRA.

These dramatically increase your contribution limits and expand your investment options.

The politicians will always chicken out, or water down any real change when it’s crunch time.

And the people will absolutely lose their minds when a real solution is implemented, or when the day of reckoning comes.

Don’t be part of that crowd.