“What we are paying for is twenty years of blunder and neglect.” 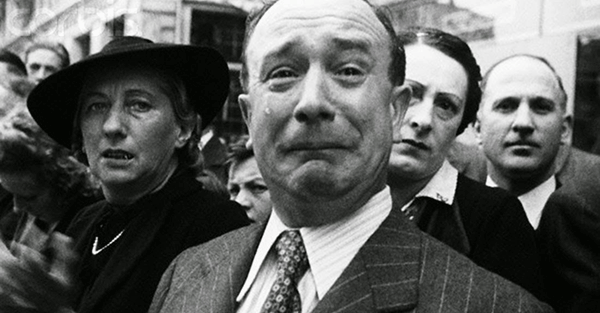 In May 1940, a visibly concerned Winston Churchill traveled to Paris to survey the city’s defenses.

Nazi forces had already blasted past French units and were rolling easily through the Somme Valley towards Paris.

“Where are your reserve forces?”

He later wrote in his memoirs that their response was one of the most shocking moments of his life. “Aucune,” replied the commander. “We have none.”

And on June 22, 1940, seventy-five years ago to the day, French diplomats signed a peace treaty making France a vassal state of Nazi Germany.

Maxime Weygand, France’s most esteemed general, remarked of the occasion, “What we are paying for is twenty years of blunder and neglect.”

Given the extraordinary risks in the system right now, these words may soon come to haunt us as well.

Seven years ago a global financial crisis was spawned from too much debt, artificially low interest rates, and a complete misperception of obvious risks (like loaning money to dead people…)

They ‘solved’ that problem with even more debt, lowering interest rates below zero, and continuing to ignore obvious risks (like buying stocks at all-time highs).

You don’t have to be a financial genius to see the absurdity in this logic.

Based on their own financial statements, most Western governments are completely insolvent, and most major central banks are close to insolvency.

They’ve already ratcheted interest rates down to zero (or below) and have racked up a mountain of debt.

There are effectively no tools left for governments and central banks to deal with another major crisis.

Like Paris in 1940, they have no Plan B. They’re completely defenseless to support the financial system or the currency in the event of a major shock.

We should all take a moment to appreciate this level of incompetence. This doesn’t happen overnight.

It takes decades of “blunder and neglect” to engineer financial vulnerability on this scale. But they’ve somehow managed to pull it off.

The only question is– how long until the next financial shock? Because it’s not a question of ‘if’, but ‘when’.

Note- this is not some sensationalist, fear-mongering assertion. Quite the opposite. I’m incredibly optimistic about the future (more on that in a moment). But calling a spade a spade is merely a statement of fact.

Bear in mind that financial crises, depressions, and recessions are all ‘normal’ parts of the business cycle… even when there’s not this level of risk in the system.

In the United States, in fact, the government calculates an average of 57 months between the end of one recession and the beginning of the next one.

So just looking at the government’s own historical averages, at a minimum, a recession is long overdue.

Given all the other major risks around the world (a Greek default, bond illiquidity, the Chinese stock market, etc.), something much more severe may be in store.

Today, an independent, freedom-minded person knows they can’t rely on the government to reduce the risks they face in the world.

Luckily, you don’t have to. Your government might not have a Plan B. But all the tools are out there to take care of yourself and your family.

Consider this: most of the Western financial system is extraordinarily overleveraged right now.

Banks are highly illiquid. Governments are insolvent. Debt has exploded. And yet bond liquidity is drying up at an astonishing rate.

If you are 100% invested in this system, your money is exposed to significant risk.

Greece, Iceland, Cyprus, etc. are modern testaments to how easily governments impose capital controls when the metaphor hits the fan.

Why leave yourself so vulnerable, when instead you can easily shift some of your savings to a stronger, healthier banking jurisdiction abroad?

Or you could jump ship on the corrupt paper financial system entirely by owning real assets held abroad (or digitally)– precious metals, private businesses, real estate, and even cryptocurrency.

Another smart option is to establish a second residency abroad.

This gives you the legal right to reside elsewhere, ensuring that you always have a place to go in case you ever decide leave in hurry.

With the Nazis at the gate in 1940, I imagine a lot of people in Paris probably wished they had planned better.

And in general, a major crisis can turn people’s lives upside down if they’re unprepared.

We’re in the beginning of a major system reset thanks to a massive technological revolution.

It will change everything– from the financial system to the power of government to the way that societies are organized.

And this is seriously exciting. There will likely be a number of upcoming crises as the old system fades away and a new system takes its place.

But for those who are prepared and in a position of strength with a solid Plan B, this is truly a time of tremendous opportunity.