What we can learn from the richest man in Asia 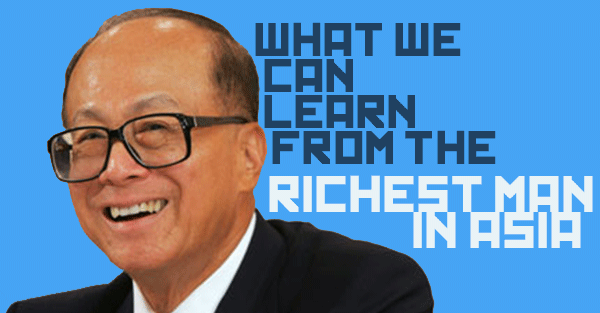 It was nine months ago when we reported that Li Ka-shing, the richest man in Asia, had sold all of his major assets in China.

In 2013 when he started dumping his Chinese property holdings he was being ridiculed and criticized. Everyone was bullish on China’s real estate market.

It turns out you don’t want to bet against a man with a track record like Li’s.

Li Ka-shing’s grasp for major trends is unmatched. And he demonstrated his shrewdness and insight yet again when China’s real estate market went into correction mode last year.

He got out right at the peak of the market.

He recognized that China’s major credit bubble isn’t sustainable. Behind closed doors, the bosses in Beijing know it too.

A recent report by the chief economist at the Bank of Singapore reveals that the Chinese leadership is desperately trying to conceal the effects of excessive credit and engineer a ‘soft landing’.

And yet Chinese credit expansion continues.

Data from the Bank of International Settlements shows that in 2014 credit expansion’s share of GDP growth soared by 14%.

Since the end of 2008, credit expansion has accounted for 79% of China’s GDP growth.

Historical data and analysis shows that such levels of credit expansion inevitably lead to a lot of bad debts that can’t be repaid.

We’ve already seen first ever Chinese corporate defaults as a result of these policies, and we can expect more.

The long-term trend for China is of course, positive, but this doesn’t mean it’s going to be a smooth ride along the way. Nothing goes up or down in a straight line.

Right now, renminbi assets are falling and renminbi is weakening. Capital is fleeing China in fear of a major credit crunch.

Li was one of the first to spot this trend, and he got out.

Moreover, he’s hedging his bets across the board.

His most recent move is to restructure his investment companies and move them to the Cayman Islands.

Li is being very prudent– moving his money and his assets far away to safe, stable locations so that no single government has control over him.

Now, Hong Kong is an incredible place. The banks are well-capitalized, the government is solvent, and there’s a lot of economic opportunity.

But no matter how safe you think your home country might be, it NEVER makes sense to be completely dependent on one place.

Li understands that. Hedging your bets is crucial.

In doing so, Li is also making sure that the wealth he worked to build over his entire life will be properly safeguarded for his family.

It’s hard to imagine he’ll be worse off for doing any of this. And if the worst happens, Li will be much better off for following his instincts.

This is good advice for anyone.

Remember: rational, successful people have a Plan B.