It doesn’t matter that we “owe it to ourselves” 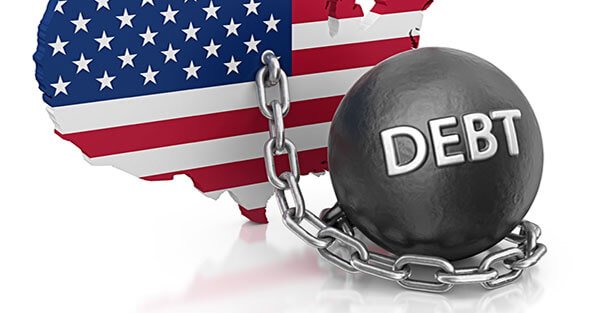 [Editor’s Note: As we’re coming up on the end of the year, we thought it would be appropriate to republish some of our most popular articles. Today’s was originally published on March 14, 2017]

Thousands of years ago, as far back as 3000 BC, the ancient Egyptians had developed a highly advanced system of writing using hieroglyphic symbols.

The used hieroglyphs for numbers as well.

Since the Egyptians had not yet invented the “zero” in 3000 BC, representing the number 10 required a new symbol– a sort of upside down horseshoe.

The largest number in ancient Egypt was 1 million. As historian Will Durant wrote,

“The sign for 1,000,000 was a picture of a man striking his hands above his head, as if to express amazement that such a number should exist.”

Today the national debt in the Land of the Free is just shy of $20 trillion.

It makes me wonder what symbol the ancient Egyptians would have used to represent such an absurd figure. Hope and change?

Even the concept of trillion is difficult for our minds to fully grasp as there is very little within our physical human experience which relates to it.

And yet, the debt is very real.

Of course, we’re told that the debt isn’t important.

Modern “experts” who win our society’s most esteemed prizes for intellectual achievement tells us that the debt doesn’t matter “because we owe it to ourselves.”

This is pitiful logic.

The rest is owned primarily by the Federal Reserve, Social Security trust funds, US banks, large US companies, and the federal government itself.

But I fail to see how this is relevant. A debt owed is a debt owed.

It’s not like the US government could simply default on the Federal Reserve in cavalier fashion; that would render the central bank completely insolvent and cause a major currency crisis.

Defaulting on the trillions of dollars owed to Social Security and other pension funds would effectively destroy the livelihoods of hundreds of millions of people.

Defaulting on the debt owed to banks in the United States would cause the biggest financial crisis in US history.

Defaulting on the $1+ trillion owed major US corporations would bankrupt a number of large businesses and cause a deep recession.

And defaulting on the Department of Defense would simply be idiotic; Congress would have to immediately bail out the military with emergency funds.

So it’s difficult to find any comfort in this “we owe it to ourselves” nonsense.

The truth is that the debt absolutely matters.

It’s not some casual rounding error; it’s a major issue that already sucks up hundreds of billions of dollars in tax revenue each year just to pay INTEREST.

And that’s at a time when the government’s average interest rate is just 2%… an all-time low.

But now interest rates are starting to rise from their historic lows.

The 30-year bond yield is proportionally 50% higher than its record low from just nine months ago.

It wasn’t even that long ago, just prior to the financial crisis in late 2007, that the government’s average interest rate was around 5%.

And even that number was considered incredibly low compared to previous decades.

Yet if the average interest rate returned to just 5% (which would still be FAR below the historic average), the government would spend more than $1 trillion each year just to pay INTEREST.

Naturally they’d have to borrow even MORE money, which would add even more to the debt and make their interest payments go up even more.

History is full of examples of debt bankrupting dominant superpowers, going all the way back even before the ancient Egyptians.

This time is not different.

Debt is a ticking time bomb. And in this case, given the widespread consequences across the world, the bomb is nuclear.

Don’t get me wrong– nothing is going to happen tomorrow.

I’m not here to spread fear and panic about some imminent collapse. There’s too much of that garbage on the Internet.

But it is incredibly foolish to ignore such a prodigious risk.

Imagine there’s literally a nuke sitting on your desk right now; you don’t know when it will go off… probably not for several years at least.

But would you honestly stick around to find out?

Sure, maybe by some miracle the situation will resolve itself. Maybe every foreign government wakes up tomorrow and simultaneously forgives US debt.

We can hope for the best.

But you won’t be worse off taking astute, conservative steps to distance yourself from such obvious risks… steps that make sense no matter what happens (or doesn’t happen) in the future.

For many readers, you might still be decades away from retirement.

Given current data and trends, it’s entirely possible that the US government’s finances will have deteriorated into a default scenario by then.

So it’s hard to imagine that you’ll be worse off for setting up a better, more robust retirement vehicle today… a structure that allows you FAR more latitude to generate stronger, safer returns while minimizing exposure to this debt bomb.

There are so many other options– cash, gold, cryptofinance, better banks, safer investment choices.

We’ll talk about more of these in the coming days.